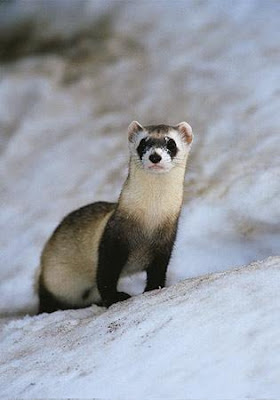 Not your best friend forever – your Black Footed Ferret!
The Black-footed Ferret is the most endangered land mammal in North America. It was declared extinct in 1979 but a live BFF was seen in Oct. 1981. Since it’s observation in 1981, conservation efforts have been implemented to help increase and maintain the population of this small mammal.

The Black Footed Ferret is a member of a large group of mammals known as mustelids, or musk-producing animals. Sixty-four species of mustelids live throughout the world, except on the continents of Australia and Antarctica. Mustelids range in size from the least weasel, which weighs barely 1-2 ounces, to the sea otter, which may weigh over 100 pounds. Most mustelids have long bodies and short legs, well-developed claws, short, rounded ears, and scent glands under the tail. Their large skulls and strong jaws and teeth are adapted for eating meat. Some well-known members of the mustelid family include mink, skunks, badgers, martens, fishers, weasels, stoats, polecats, wolverines, and the European, or domestic ferret, sold in pet stores.

Black-footed ferrets are primarily nocturnal, making direct observation difficult. Most of their daytime activity is limited to the first few hours following sunrise. They spend most of their time underground in prairie dog burrows, typically spending only a few minutes aboveground each day to hunt or find new burrows or, in spring, mates. In burrows they sleep, cache their food, escape from predators and harsh weather, and give birth to their young. Ferrets do not hibernate, but in winter, the amount of time they are active and the distances they travel decrease substantially. They have been found to remain underground in the same burrow system for a week at a time in winter. In contrast, one ferret was observed traveling over six miles in one night during autumn. Males are more active than females and distances traveled by males tend to be about double that of females.

Loss of habitat is the primary reason black-footed ferrets remain near the brink of extinction. Conversion of native grasslands to intensive agricultural uses, widespread prairie dog eradication programs, and the fatal non-native disease plague have reduced ferret habitat to less than two percent of what once existed. Remaining habitat is now fragmented, with prairie dog towns separated by expanses of cropland and human development. Black-footed ferrets also face threats in the wild from predators and disease. Coyotes, great-horned owls, golden eagles, prairie falcons, badgers, bobcats and foxes all prey on ferrets. Several diseases affect black-footed ferrets, the most serious being canine distemper and sylvatic plague.

For more information on the BFF or how you can help save this adorable critter visit the Black-footed Ferret Recovery Program at: www.blackfootedferret.org