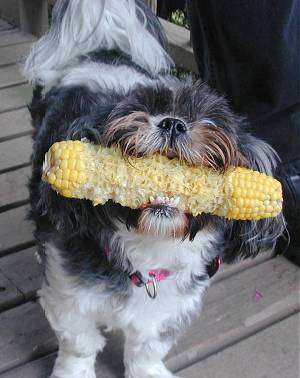 10 things dogs eat, but shouldn’t. It was kind of interesting, but none all to surprising. Here’s his top ten list:

10: Sticks. You bet. They splinter, poke and tear up a gut at times. In my experience, it’s not just the stick, but the peritonitis which may result from the “poke.”

9: Hair ties and hair ribbons. Yes, girls smell better. So do their accessories. Dogs can’t help but like picking these attractive things up and chewing/swallowing them.

8: Bones. We have a lot of barbecues and cookouts around here. Most people know to keep chicken and turkey bones away from pets, but, yes, pork, venison and beef bones can sometimes cause trouble in the intestines of dogs. The best rule? No bones at all.

7: Corn Cobs. Yes, just had one week before last. Funny how they’ll go down an esophagus but get caught in an intestine.

6: Chew Toys. This is unfortunate because these are marketed for dogs to chew on for either dental care or entertainment purposes. I have even seen dentrifice-purposed rope toys in dogs wrap themselves around the intestine, causing strangulation of the bowel in segments once the rope “unwinds.”

5: Balls. Racquetballs, tennis balls, toy rubber balls, yes, I’ve seen them caught in the throat, esophagus, stomach and intestine in my practice life. The good news? At least they light up well on the x-rays.

4: Rocks. Rocks in solitary form or an amalgamation of small rocks together can really clog up the works in an intestine. Why do dogs in particular eat rocks? Do they need minerals? Are they that bored or that hungry? All I know is, they do. The good news diagnostically is that, like bones and balls, these are easily spotted on x-rays.

3: Panty hose. What a fetish! Nylons have an interesting texture. Whether it’s that texture or the scent, we’ve seen our share of these, both wadded up and acting as linear foreign bodies. Some women tell me that we’ve removed some of these weeks after they thought the hose were missing. A testament to malleability, I guess.

2: Briefs/Panties. Equal time for men’s underwear here. I’m talking about tighty-whities in most cases, but, they’re tinted a different color by the time we remove them.

And Number 1? Socks. That’s so common, it’s not surprising. Foot odor is very attractive to dogs, and socks get thrown loosely on the floor, particularly by men.
There you have it, so the next time you just throw your socks on the floor, remember that you might have to have the vet take them out of your dog later! Now you have no excuses for not putting all the dirty laundry in the hamper!