What Your Dog Says About Your Personality 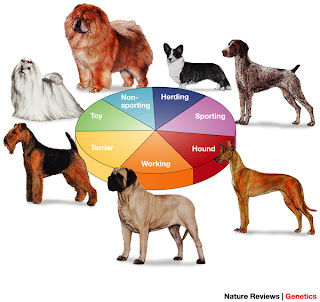 They can’t talk, but dogs say a lot about their owners’ personalities, a new study has found.

“People tend to report that their dog’s personality is quite similar to their own, but we wanted to see if these stereotypes actually stand up to scrutiny,” said study author Lance Workman, a psychologist at Bath Spa University in the U.K.
Using an online survey, Workman and colleagues probed the personalities of 1,000 dog owners and found some surprising trends.
“Among the owners of seven breed groups, there were differences in personality,” said Workman, who is presenting the study today at the British Psychological Society annual conference in London.
Read on to see what your canine companion says about you.

People who owned sporting dogs, like Labrador retrievers and cocker spaniels, appeared more agreeable and conscientious in the survey.
“I used to have a cocker spaniel,” said Workman. “I’d like to think that’s me to a tee.”
Labrador retrievers are the most common breed registered in the U.S., according to the American Kennel Club, or AKC. They are regarded as gentle, obedient and eager to please.

People who owned herding dogs, like German shepherds or sheepdogs, were more extroverted.
“I think people pick a dog that fits into their lifestyle,” said Workman. “If they’re outgoing, they tend to want an outgoing dog. They say, ‘Yeah, that sounds like me.'”
German shepherds are the second most popular breed in the U.S. They’re fearless, but not hostile, eager and alert, according to the AKC. They serve as watchdogs, service dogs and herding dogs.

People who owned hound dogs, like greyhounds and beagles, were more emotionally stable, according to Workman’s survey.
“That means calm and consistent,” said Workman, who pointed out that President Lyndon Johnson had a beagle.
Beagles, known for their happy-go-lucky, family-friendly demeanor, are the third most popular breed in America. Greyhounds are the fastest breed, according to the AKC.

People who owned toy dogs, like Chihuahuas or Yorkshire terriers, were more agreeable, more conscientious and more open to new experiences.
“Openness to new experiences is sometimes lumped in with intelligence,” said Workman. “There’s this view that people who own toy dogs are air heads, so this was quite nice to see.”
Celebrity toy dog owners include Paris Hilton, who has a Chihuahua named Tinkerbell. The breed is known for its confidence and sense of self importance, according to the AKC.

People who owned utility dogs, like English bulldogs Shar-Peis and Chow Chows, were more conscientious and extroverted.
The English bulldog, which muscled its way into the AKC’s top 10 breeds in 2008, is known for its kindness, courage and “dignified” demeanor. They’re also gentle and protective.

No personality traits stood out in the survey among people who owned terriers, like the Staffordshire bull or the Scottie dog.
“Terrier owners were kind of middling,” said Workman. “They weren’t high or low on anything in particular.”
The Staffordshire bull mixes courage and tenacity with affection for friends, children in particular. Scottie dogs, on the other hand, “exude ruggedness and power,” according to the AKC.

Like terrier owners, people who owned working dogs, such as Dobermans or schnauzers, had no standout personality traits.
“They tend to be agreeable, but most dog owners are,” said Workman.

When asked whether dog owners were more agreeable than cat owners, Workman paused.

PrevPreviousMilitary dogs are coming home with post-traumatic stress disorder
NextWhat Has Your Pet Taught You About Life?Next