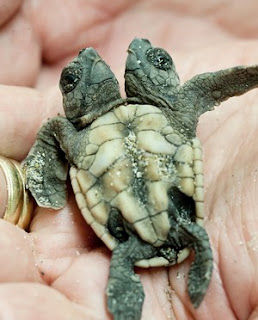 JUPITER ISLAND — Simon Bilts said he “almost did a double take” when he saw it: a two-headed loggerhead sea turtle hatchling.

On Tuesday morning, the biologist with Jensen Beach-based Ecological Associates Inc., was on the northern end of Jupiter Island excavating sea turtle nests that had hatched three days earlier to determine the reproductive success rate.

It’s not unusual for a straggling hatchling or two to be found among the empty and unhatched egg shells.

The hatchlings Bilts uncovered soon after he started searching nests at 6 a.m. were escorted to the ocean. The ones found after 9 a.m., in accordance with Florida Fish and Wildlife Conservation Commission guidelines, were put in a bucket with moist sand and covered with a towel for release after nightfall.

Bilts had several hatchlings in the bucket and was driving an all-terrain vehicle to the next nest when the towel blew off. He was putting the towel back on when he noticed something unusual about one of the hatchlings.

“I looked closer, and sure enough, it had two heads,” he said. “I hadn’t noticed that before. It was a little bit of a shock.”

Bilts said he’s worked with sea turtles “off and on” since 2000, and “I’d never seen a two-headed turtle before.”

Erik Martin, the scientific director at Ecological Associates, said two-headed turtles “are kind of rare. I’ve only seen one before, back in 1984.”

Bilts brought all the post-9 a.m. hatchlings, including the two-headed rarity, back to the Ecological Associates lab. The day spent in a cool, dark area of the lab gave scientists there an opportunity to examine the rare find.

“He seemed to be relatively healthy,” Martin said. “Of course, its shell was somewhat deformed to make room for the two heads.”

Otherwise, the hatchling was active and able to crawl with both heads moving independently.
That night, Bilts released the hatchlings near Jensen Beach.

Only about one in 5,000 hatchlings lives to adulthood, mostly because of predators both on the beach and in the water. Having two heads would seem to have both advantages and disadvantages for young sea turtles.

Advantage: Better peripheral vision.
“Hey, there’s a shark coming up on the left!”
Disadvantage: Potential for arguments.
“How about some crabs tonight?”
“Nah, I’m tired of seafood.”

Unfortunately, said Niki Desjardin, a senior scientist with Ecological Associates who’s been studying sea turtles for 11 years, two heads are not better than one.

“It puts a strain on the turtle’s internal organs,” she said. “And the fact is, you never see adult turtles with two heads.”

In late July, a two-headed loggerhead hatchling was found on the beach at the Gumbo Limbo Nature Center in Boca Raton.

“Actually, it was almost a two-bodied hatchling joined at the hips,” said Kirt Rusenko, a marine conservationist and head of the sea turtle program at the center. “It had four flippers, two heads and almost two carapaces (shells).”

Rusenko said two-headed sea turtle hatchlings are found “every two or three years” at the center, and a two-headed embryo discovered several years ago was found to have a high level of pesticides in its body.

The turtle found in July died of pneumonia, he said, because when one head came up to breathe, the other took on water in the lungs they shared.

Of the three species of sea turtles that regularly nest on Treasure Coast beaches, loggerheads are the most common, but still are listed as a threatened species.

Sea turtle nesting season began March 1 and runs until mid-September. Nearly 10,000 loggerhead nests were tallied in 2011 by Ecological Associates, which monitors sea turtles nests in southern St. Lucie County, northern Martin County and northern Indian River County, and by the coastal engineering division of the Indian River County Public Works Department, which monitors beaches in the southern half of that county.

In the same areas, 1,652 green turtle nests and 558 leatherback nests were counted in 2011.
Martin said nest numbers “are looking good so far this year.”