Tracking a Subtle Scent, a Dog May Help Save the Whales 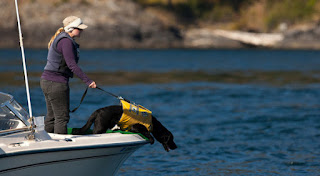 OFF THE COAST OF SAN JUAN ISLAND, Wash. — A dog named Tucker with a thumping tail and a mysterious past as a stray on the streets of Seattle has become an unexpected star in the realm of canine-assisted science. He is the world’s only working dog, marine biologists say, able to find and track the scent of orca scat, or feces, in open ocean water — up to a mile away, in the smallest of specks.

Through dint of hard work and obsession with an orange ball on a rope, which he gets to play with as a reward after a successful search on the water, Tucker is an ace in finding something that most people, and perhaps most dogs, would just as soon avoid. And it is not easy. Scat can sink or disperse in 30 minutes or less. But it is crucial in monitoring the health of the whales here, an endangered group that is probably among the most studied animal populations in the world. Most of the 85 or so orcas, or killer whales, that frequent the San Juans, about two hours northwest of Seattle, have been genotyped and tracked for decades, down to their birth years and number of offspring.

And none of this could happen as easily as it does without Tucker and his wet, black nose — or the new tricks that he taught the scientists. “Sometimes he’d just turn around and sit down and stare at me, waiting for me to figure it out,” said Deborah A. Giles, who is completing a Ph.D. on how orcas here are affected by the thousands of whale watchers and scores of commercial whale-watch vessels that cluster around the animals. “He’s very subtle,” said Ms. Giles, sitting behind the wheel of the research vessel Moja as Tucker, an 8-year-old black Lab mix, paced at the prow on a recent afternoon.
One thing to get out of the way quickly: orca scat really does not smell that bad. Perhaps because the animals eat mostly Chinook salmon — the tastiest kind, many human seafood lovers agree — the scent is more fish than foul. But unlike, say, a narcotics-sniffing dog that can lead its human around by a leash, the research boat itself is, in effect, Tucker’s legs when he has picked up the aroma. He cannot physically go where the sample is to be found, but must somehow signal where he wants the boat to go, with the feces somewhere out there on the water.
Like a Delphic oracle whose every nuanced expression must be interpreted by acolytes — Tucker might lean to one side of the boat, then another, then suddenly sink back onto his green mat with his head between his paws, the scent lost — his nose for scat leads on, and all must follow. “The slightest twitch of his ear is important,” said Elizabeth Seely, a trainer who has worked with Tucker for four years at a nonprofit group called the Conservation Canines, which specializes in dog-assisted research on behalf of endangered species. She stood at his side on a recent scat-search session, signaling to Ms. Giles behind the wheel with tiny finger motions — a bit to the right, a bit more to the left, circle back — that Tucker was suggesting by his posture and level of attention.
Out on these waters, though, it seems that every creature is learning new tricks. Salmon have taken to hiding under commercial whale-watch boats when they are being hunted by the orcas. The boats, in turn, are filled with people — upward of 500,000 during the peak season from May to October — who have paid to see whales and who in many cases, boat operators and scientists say, return home wanting somehow to help the animals. Whale-loving visitors in turn reinforce a local economic engine that hinges more and more on having whales to see.
The whales are becoming, in a strange way, more in sync with the rhythms of their human watchers — resting less during daylight and more at night than they used to in the 1980s or ’90s. As part of her dissertation at the University of California, Davis, Ms. Giles is examining reduced prey availability and increased vessel presence as potential causes.
For Tucker, though, it mostly comes down to his ball toy, which he plays with in exuberant, wild abandon, tossing it into the air and staging crouched bouts of tug of war with Ms. Seely. When a fecal sample is found, the researchers carry it toward him and then substitute the ball at the last second, reinforcing the connection between work and reward.
Another scat dog in training, a flat-coated retriever named Sadie, was donated to the program by an owner who could not deal with her ball fixation. In frustration, the owner put Sadie’s ball on top of the fridge. Eight hours or so later, she returned and found Sadie still sitting there, staring up at the object of her desires. “When the owner told me that story, my immediate response was, ‘We’ll take her,’ ” said Prof. Samuel K. Wasser, the director of the Center for Conservation Biology at the University of Washington and the director of the orca scat research project.
The research, financed by Washington Sea Grant of the National Oceanic and Atmospheric Administration, is raising new questions about how to protect the orcas. Professor Wasser said that when he started the project four years ago, he thought boat activity would be a crucial element of whale stress, reflected through stress hormones in their scat. But it turned out, he said, that food supply was more important, with fewer salmon — because of overfishing by humans or habitat degradation or both — emerging as a main stress variable. Knowing to focus on fish supply, he said, means knowing where to focus public policy efforts on the animals’ behalf.
Through the scat, biologists can tell, for example, which whale pods spend the winter off the coast of Southern California, because their feces can contain higher trace elements of DDT, the pesticide that was banned in 1972. The poison still echoes through the decades in the fish the whales eat before returning north. Other orca groups have concentrations of dioxins or PCBs traced to industrial activity around Seattle.
But for all his hundreds of hours on boats, Tucker will not get wet. He hates to swim, Ms. Seely said. She is not sure why. A trauma from puppyhood, she supposes. It is one thing about which he cannot communicate.