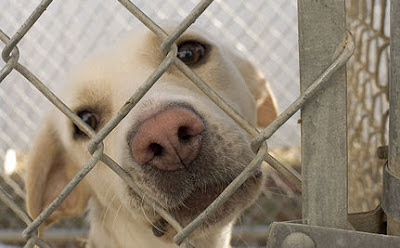 If I were responsible for a class or student group dedicated to social justice, the very first cause I would bring to my students’ attention is the plight of the animal shelters: mistreatment, poor health and homelessness of animals, especially dogs. There are several reasons why I think this is an excellent case study for socially-minded young people to cut their teeth on:

1) The injustice is local and concrete and efforts are immediately rewarded. It’s easy to visit a local animal shelter and see a lot of lonely animals looking for homes. The immediacy of the concern provides an emotional punch that more abstract issues may not have.

Though we won’t completely solve the problem any time soon, any student could potentially help a single animal by encouraging a friend or family member to adopt from a shelter instead of a pet store, or many animals by volunteering at the shelter.

2) The underlying factors are global and similar to other social justice issues in their origins. Everything from depletion of fishing stocks to anthropogenic climate change to the blood diamond trade is significantly affected by consumer behavior. We often cast the most far-reaching votes with our wallets. And you’d be hard-pressed to find a more immediate example of the effects of ignorant consumer behavior than the histories of the abandoned dogs in an animal shelter.

You see, it’s all about supply and demand. As long as there is a market for the newest, trendiest puppies, there will be puppy mills churning them out. In the wake of releases and re-releases of Disney’s animated and live-action 101 Dalmatians films, tremendous numbers of people started buying Dalmatians, often impulsively and with little knowledge of the breed. As a result there is a Dalmatian over-population problem even today, since the sort of fickle buyers who adopt trendy puppies on a whim are the same sort to abandon them as adults, often with bad habits from lack of training or emotional issues due to poor treatment.

Even in a perfect world where every new dog owner made a life-long commitment to their new pets, there would still be an over-population problem. When greedy puppy-millers start forcing dogs to be continuously pregnant in order to produce as many “in-demand” puppies in as short a time as possible, there will inevitably be a surplus as demand drops off. And there’s always some flavor of the week. A couple years ago, it was all about the puggles, as several Hollywood celebrities started showing theirs off.

3) The solutions to the problem are both individual and collective. Once you understand the problem, the solution is obvious. Clearly some types of adoption ease the problem of animal homelessness, and some exacerbate it. Buying either purebred or designer dog mixes from pet stores or backyard breeders just results in more and more dogs being produced to meet the demand. Since a not-insignificant fraction of these dogs will later be given up by their owners, faddish dog-purchases only add to the burden of already over-crowded shelters by increasing the over all population of unwanted dogs.

It’s not difficult for would-be pet-owners to see how the adoption choices they make can either mitigate or add to the problem of unwanted pets (not to mention the problem of animal mistreatment that occurs in puppy mill operations). If no one supported puppy mills, they would quickly cease to exist. On an individual level, any one of us planning on adopting has the choice of making things just a little bit better or a little bit worse. Once someone is aware of the consumer power they wield, it’s an easy choice.

As animal advocates, we can have a wider impact by educating other prospective pet owners so they can also make an informed choice. Through public education and outreach efforts (or partnerships with existing efforts by local shelters and organizations like The Humane Society), individual students and groups can do even more good. Regular events like adoption drives can always use more volunteer help and word-of-mouth advertising.

Being an informed consumer is probably at least as important as being an informed citizen. The politico-economic power average people wield is collectively enormous. Having learned a bit about consumer power and the value of public outreach, there are plenty of other issues that young people can take on with those same tools. How do we encourage major international companies to take their social and environmental responsibilities seriously? Reward the best ones with your business, boycott the worst. Educate other consumers to do the same.

There’s a place for political activism in the quest for a better world: a big one. Anyone serious about social justice should write a few letters to their political representatives. But especially for students who don’t yet qualify to vote, it seems obvious to me that the first lesson we should teach them is just how much influence they already have through consumer activism. Companies spend billions on advertising telling the teenage market what to want, wear, watch, buy and do. I’d like to see the teenagers tell the companies what to do for a change