The Dogs of War: Beloved Comrades in Afghanistan 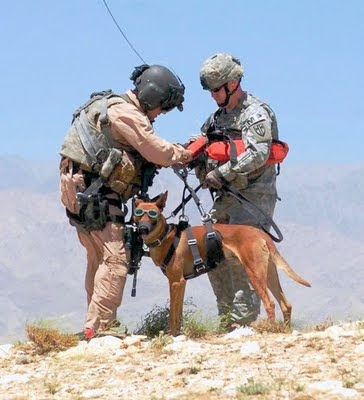 WASHINGTON — Marines were on a foot patrol last fall in the Taliban stronghold of Marja, Afghanistan, when they shot and killed a lethal threat: a local dog that made the mistake of attacking the Marines’ Labrador retriever.

Capt. Manuel Zepeda, the commander of Company F, Second Battalion, Sixth Marines, was unapologetic. If the Lab on the patrol had been hurt, the Marines would have lost their best weapon for detecting roadside bombs — and would have called for a medevac helicopter, just as they would for a human. An attack on the Lab was an attack on a fellow warrior.

As Captain Zepeda put it that day, “We consider the dog another Marine.”

The classified canine that went on the Navy Seals’ raid of Osama bin Laden’s compound last week has generated a wave of interest in military dogs, which have been used by the United States since at least World War I. Now, more valued than ever, they are on their own surge into Afghanistan.

American troops may be starting to come home this summer, but more dogs are going in. In 2007, the Marines began a pilot program in Afghanistan with nine bomb-sniffing dogs, a number that has grown to 350 and is expected to reach nearly 650 by the end of the year. Over all, there are some 2,700 dogs on active duty in the American military. A decade ago, before the Sept. 11 attacks, there were 1,800.

“Most of the public isn’t aware of what these dogs add to national security,” said Gerry Proctor, a spokesman for training programs at Lackland Air Force Base in Texas, including the Military Working Dog School. Dogs are used for protection, pursuit, tracking and search and rescue, but the military is also increasingly relying on them to sniff out the homemade bombs that cause the vast majority of American casualties in Afghanistan. So far, no human or human-made technology can do better.

Within the military, the breeds of choice are generally the German shepherd and a Belgian shepherd, or Malinois, but Marines in Afghanistan rely on pure-bred Labrador retrievers because of the dogs’ good noses and nonaggressive, eager-to-please temperaments. Labs now accompany many Marine foot patrols in Helmand Province in southern Afghanistan, wandering off-leash 100 yards or more in front as bomb detectors. It is the vital work of an expensively trained canine (the cost to the American military can be as high as $40,000 per dog), but at the end of a sweltering day, sometimes a Lab is still a Lab.

Last spring on a patrol in Helmand’s Garmsir District, a Lab, Tango, was leading a small group of Marines on a dirt road leading into a village when the dog suddenly went down on all fours, wagging his tail — a sign that he had detected explosives nearby. The patrol froze as a Marine explosives team investigated. No bomb was found and the patrol continued, but on the way back the dog, miserable in the 102-degree heat and like most Labrador retrievers a good swimmer, abandoned his duties and leaped into an irrigation canal to cool off. But then he could not climb back up the steep bank. One of the Marines, swearing lustily, finally jumped into the canal and carried the dog out in his arms.

The bonds that grow in battle between the Labs and their Marine handlers are already the stuff of heart-tugging war stories. But few have had the emotional impact of that of Pfc. Colton W. Rusk, a 20-year-old Marine machine gunner and dog handler who was killed in December by sniper fire in Sangin, one of the most deadly areas in Helmand. During his deployment, Private Rusk sent his parents a steady flow of pictures and news about his beloved bomb dog, Eli, a black Lab. When Private Rusk was shot, Marine officers told his parents, Eli crawled on top of their son to try to protect him.

The 3-year-old Eli, the first name of the survivors listed in Private Rusk’s obituary, was retired early from the military and adopted in February by Private Rusk’s parents, Darrell and Kathy Rusk. “He’s a big comfort to us,” Kathy Rusk said in a telephone interview from her home in Orange Grove, Tex. After the dog’s retirement ceremony in February at Lackland Air Force Base, an event that generated enormous news coverage in Texas, the Rusks brought Eli for the first time into their home. “The first place he went was Colton’s room,” Mrs. Rusk said. “He sniffed around and jumped up on his bed.”

So far, 20 Labrador retrievers out of the 350 have been killed in action since the Marine program began, most in explosions of homemade bombs, Marine officials said. Within the Special Operations Command, the home of the dog that went on the Bin Laden mission, some 34 dogs were killed in the line of duty between 2006 and 2009, said Maj. Wes Ticer, a spokesman. Like their handlers, dogs that survive go on repeat deployments, sometimes as many as four. Dogs retire from the military at the age of 8 or 9.

To an American public weary of nearly 10 years of war, dogs are a way to relate, as the celebrity status of the still-unknown commando dog proved. (President Obama is one of the few Americans to have met the dog, in a closed-door session with the Seal team last week.)

Few understand the appeal of dogs in battle better than Rebecca Frankel, the deputy managing editor of ForeignPolicy.com. Last week, she posted a “War Dog” photo essay, with her favorite pictures of dogs jumping out of helicopters, skydiving from 30,000 feet and relaxing with Marines. The photo essay went viral, with 6.5 million page views to date — a record for the site.

“I think people go weak at the knees for these dogs,” Ms. Frankel said in an interview. “I do, too. But their contribution is significant. These are serious dogs.”