The Dalmatian’s History in Fire Service 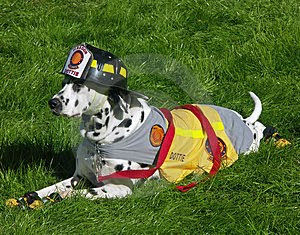 “The Dalmatian is a very physical breed, with a strong, muscular body, and able to run great distances without tiring. The Dalmatian also has what seems to be a natural calming effect on horses. This trait about the breed was seen very early on, and soon the Dalmatian was identified with horses. Possibly horse mounted warriors or hunters first used the breed in their activities. During the 17th, 18th, and 19th centuries when the mode of travel was by horse or by carriage, the Dalmatians became a society dog, and trained to run along side women’s carriages. They became known as Coach dogs or Ladies dogsbecause of this. In fact, the term coaching is referring to how the Dalmatian will take up position justoff the side and towards the rear of a horse and run with them.

In the 1700’s, dalmatians were used to protect horses that pulled English stagecoaches. Typically two dalmatians would run next to the horses as they pulled the coach. When other dogs tried to run out and scare the horses, the dalmatian team would chase them away. Over the years, dalmatians formed a close bond with horses.

During this time, horse theft was very common. Because of the potential for theft, stagecoach drivers would typically sleep in a hammock strung between two stalls where they would watch for thieves. However, because of the bond between the dalmatians and the horses, the driver could sleep in a hotel or house if he owned a dalmatian. Why? Because the dalmatians would sleep with the horses and guard against horse theft.

It is during the era of horse drawn fire apparatus that the Dalmatian becomes forever tied to the Fire Service. These fire house horses were required to spend hours at a time at a fire scene, or hours inside the fire house waiting for a call, and despite many misbeliefs, these fire house horses were not broken down old hags, but fine spirited horses. The Dalmatian became the horses pet as it were, to help keep them calm. There are many reports and stories of seeing a fire team rushing to the scene of a call, with a Dalmatian or two running between the horse teams. Once on the scene of the call, the Dalmatian took over as guard dog, insuring that nothing was stolen from the apparatus. The Dalmatian is a very loyal breed to its owners, and an admirable foe when challenged.