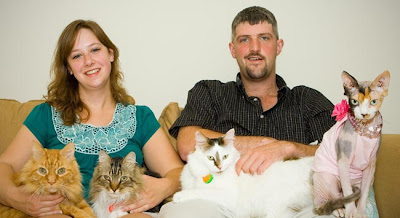 Their stories… (If you’re bored, stop here. It only gets more detailed)

Let’s start with the cats. I will keep this as concise as possible. My cats are my passion and I could write volumes about them, about us, but I’ll spare you the cat loving dribble.

So, in alphabetical order (Yep, there are really 7)

Butters- 6 year old neutered male longhaired orange tabby. He is the newest cat and the one I thought may never get adjusted to a multi-cat household (that’s professional speak for owned by the Crazy Cat Lady- a title I happily wear) I offered to adopt him from Stacy, another tech here at Kingsbrook, when he redirected his aggression towards her other 3 cats (even though he’d grown up with them). The addition of 2 new baby humans and busy schedules seemed to be too much for this giant (he is huge!). But by relocating him, the other cats “put him in his place”, literally, as the hierarchy shifted and he was no longer dominate. He socializes well now with the other cats and allows me to pet him (on his terms). He is the most independent resident we have.

Ferdinand Magellan- 7ish neutered male longhaired tabby. He was a foster cat from the humane society that never left. I officially adopted him 3 years ago. When I got him, he had no hair, was emaciated and covered in fleas. He was neutered and wore a flea collar though! He was a stray, from the rough part of town, but was as affectionate and clingy as they get. From the moment I brought him home, he never left my side and has befriended ever cat he’s ever met. He’s also been the nurse-maid to 3 litters of kittens I’ve raised (cleans them, sleeps with them). He is the peace-maker at home and grooms the other cats.

JJ- 2 year old neutered male shorthaired tabby- I found him while I lived in NW PA, on my way to work in a snow storm (it snowed a lot up there). He was only about 7 weeks old, crossing the road in front of the Sheetz gas station, hence his original name. He was adopted by a lady I worked with for her elderly mother, whom passed a year ago, and JJ came back to live with me(with a few bad habits like eating bread through the bag and counter surfing). He is the most agile and energetic, next to Pirate Fox.

Johnnie Cotton- 4 year old neutered male longhaired white and tabby- Another PA transplant, I think he wandered down the street from the dairy farm close to my previous house. I found him mewing loudly in the bushes during a thunder-storm. He was about 8 weeks old and so cute! Johnnie is passive but not easily intimidated.
Pirate Fox- 2 year old neutered male longhaired orange tabby- He is Butters “Mini-Me”- he looks just like him in miniature form (His legs are unusually short and stumpy)! I adopted him 1.5 years ago from Promise Animal League, a rescue I work closely with. He is wild and crazy and totally hilarious most of the time.

Sammi- 12 year old neutered male white shorthair- He was rescued 3 years ago from a previous owner who was unable to keep him because she was moving to a retirement home. He lived with her as an only cat for 10 years and still screams if another cat gets within his personal space. He sleeps beside by head, laying on my arm, every night.

Willow Marie- 7 year old spayed female Sphynx- the only cat I’ve ever bought from a breeder! I got her 4 years ago from a breeder in TN, who was selling her as a queen (breeding female). I did breed her once; she had 4 babies, and was spayed shortly after. She sleeps under the covers in bed all day, coming out periodically to nibble at her dry food and use the facilities. She has a small duffle bag full of kitty contour and enjoys weekly bathes and outfit changes. She sleeps on the other side on my head every night.

So, those are all the cats. Then the rest…