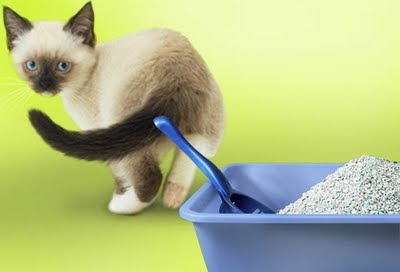 Keeping your cat’s litter box up to his standards is very important. The following suggestions should keep your cat from “thinking outside the box.”

So you may have to compromise.

Keep the litter box in a spot that gives your cat some privacy yet is also conveniently located. If the box is too hard to get to, especially for a kitten or an elderly cat, he just may not use it.
Avoid placing litter boxes next to noisy or heat-radiating appliances, like the furnace or the washing machine. The noise can make a cat nervous, while the warmth of a dryer or furnace can magnify the litter box smell, which could make him stay away from it.
Put the box far away from his food and water bowls. Cats don’t like that smell too near their food and may not use the box.
Place at least one litter box on each level of your house. That way your cat has options if access to his primary box is blocked (the basement door is closed or your dinner party has him holed up in the bedroom.) If you have more than one cat, provide litter boxes in several locations so that one cat can’t ambush another cat using the litter box.
If you keep the litter box in a closet or a bathroom, be sure the door is wedged open from both sides to prevent your cat from being trapped inside or locked out. Depending on the location, you might consider cutting a hole in a closet door and adding a pet door.
Pick of the litter
Research has shown that most cats prefer fine-grained litters, presumably because they have a softer feel. The new scoopable (clumping) litters usually have finer grains than the typical clay litter and are very popular because they really keep down the odor. But high-quality, dust-free clay litters are fairly small-grained and may be perfectly acceptable to your cat.

There are several different types of cat litter on the market. The most popular ones are: traditional clay litter; scooping/clumping litter; crystal based/silica gel litter; and plant-derived/bio-degradable litter.

If your cat has previously been an outdoor one and prefers dirt, you can keep him out of your houseplants placing medium sized rocks on top of the soil and/or by mixing some potting soil with your regular litter. A cat who rejects all types of commercial litters may be quite happy with sand. Once you find a litter your cat likes, stick with it. Switching litters constantly could result in your cat not using the litter box.

Smelling like a rose
Many people used scented litter to mask litter box odors, but those scents can put off many cats. For the same reason, it’s not a good idea to place a room deodorizer or air freshener near the litter box.

A thin layer of baking soda placed on the bottom of the box will help absorb odors without repelling your cat. And if you keep the box scrupulously clean, it shouldn’t smell.

If you find the litter box odor offensive, your cat, with his keen sense of smell, probably finds it even more offensive and won’t want to go there.

How many?
The general rule of thumb is one box for each cat plus one more. Then none of them will ever be prevented from eliminating in the litter box because it’s already occupied.

It’s not possible to designate a personal litter box for each cat in your household, as cats may use any litter box that’s available. That means a cat may occasionally refuse to use a litter box after another cat has been in it. In this case, you’ll need to keep all of the litter boxes extremely clean, and you might even need to add additional boxes. However, it’s best not to place al the boxes in one location because your cats will think of them as one big box and ambushing another cat will still be possible.

Under cover
Some people prefer to provide their cats with a covered litter box, but doing so may introduce some potential problems. To discover which type your cat prefers, you may want to experiment by offering both types at first.

Some cats, especially those who are timid or like privacy. may prefer a covered litter box. Others will not, especially if it’s not clean. Covered boxes can decrease the amount of litter that flies from the box when your cat buries his business.

You may forget to clean the litter box as frequently as you should, because the dirty litter is “out of sight, out of mind.”
A covered litter box traps odors inside, so you’ll need to clean it more often than an open one. A dirty, covered litter box is to your cat what a port-a-potty is to you!
It may not allow a large cat sufficient room to turn around, scratch, dig or position himself in the way he wants.
It may make it easier for another cat to lay in wait and “ambush” the user as he exits the box.
Other types of litter boxes
There are wide variety of litter boxes on the market today. Keep in mind that some fancy litter box innovations are for the owner’s convenience, not the cat’s. In fact, some of these features may actually turn your cat off. It’s really best to keep it simple—a basic box, litter, and a scoop.

Keeping it clean
To meet the needs of the most discriminating cat, you should scoop feces out of the litter box daily. How often you actually change (replace) the litter depends on the number of cats you have, the number of litter boxes, and the type of litter you use.

Twice a week is a general guideline for replacing clay litter, but depending on the circumstances, you may need to replace it every other day or only once a week.

If you clean the litter box daily, you might only need to change clumping litter every two to three weeks. If you notice an odor or if much of the litter is wet or clumped, it’s time for a change.

Scrub the box every time you change the litter. Use detergent mild dish liquid to clean it, as products with ammonia or citrus oils can turn a cat off, and some cleaning products are toxic to cats.

Liner notes
Box liners are strictly a convenience for the owner; supposedly, the liner can be gathered together and tied just like a garbage bag, but the truth is that most cats shred it to bits while scratching in the box. However, it might work if your cat doesn’t work too hard to bury his waste.

Depth of litter
Some people think that the more litter they put in the box, the less often they’ll have to clean it, but that’s a mistake. Most cats won’t use litter that’s more than about two inches deep. In fact, some long-haired cats actually prefer less litter and a smooth, slick surface, such as the bottom of the litter box. Adding extra litter isn’t a a substitute for scooping and scrubbing.

“Litter Training” cats
There’s really no such thing as “littertraining” a cat in the same way one would housetrain a dog. You actually don’t need to teach your cat what to do with a litter box; instinct will generally take over. You do need to provide an acceptable, accessible litter box, using the suggestions above.

If you move, however, you will need to show your cat where the box is, though his sensitive nose will probably find it first.

Solving problems
If your cat begins to go to the bathroom outside the litter box, your first call should always be to your veterinarian. Many medical conditions can cause a change in a cat’s litter box habits. If your veterinarian examines your cat and gives him a clean bill of health, your cat may have a behavior problem that needs to be solved. See ways to solve litter box problems here »

Punishment is not the answer, nor is banishing your cat outdoors. For long-standing or complex situations, contact an animal-behavior specialist who has experience working with cats.

The Humane Society of the United States