Pill Could Join Arsenal Against Bedbugs 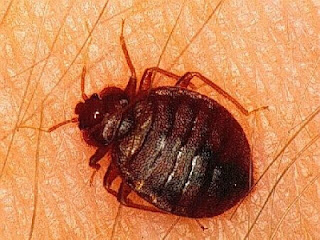 A common deworming drug can be used to kill bedbugs.

It was a visit to a cousin in New York City two years ago that inspired Thang D. Tran, a medical student at Eastern Virginia Medical School, to volunteer to become a human booby trap in the war on bedbugs.
“She told me everyone in New York was scared of bedbugs,” he said of his cousin. So when Dr. Johnathan M. Sheele, an emergency medicine specialist at his school, asked for volunteers to test a new way of killing the pests, Mr. Tran raised his arm. Soon, it was covered with itchy welts.

Dr. Sheele’s study, released at a tropical medicine convention in November, unveiled a possible new superweapon against Cimex lectularius: a deworming pill.You take the pill and go to bed — perchance even to sleep, if you can sleep knowing how patiently bedbugs wait in your walls or mattress, sniffing for the sweet stream of your exhaled carbon dioxide and for your warm skin to grow still. You let them bite you. And then — in a few days — they die.

The technique is known as xenointoxication, which sounds like intergalactic beer pong but in medical pathology is Greek for “poisoning the guest.” In Dr. Sheele’s study, over 60 percent of the bedbugs died after volunteers like Mr. Tran took a single pill. Bigger or more regular doses might improve the lethality.
And it’s not as if the drug is rare and dangerous. It’s already in thousands of American households: ivermectin, the active ingredient in the beef-flavored Heartgard Chewables that kill heartworm in dogs.
(For humans, the brand name is Stromectol, and it is available by prescription only, usually for travelers who pick up worms overseas, or toddlers who get them from playing in sandboxes used by dogs.)

Ivermectin is also very safe. Millions of doses have been given to African children to kill the worms that cause river blindness. Many Papua New Guineans get double doses to kill scabies. One early study of the drug found that up to 10 times the normal dose was safe.Ivermectin attacks a type of “gated chloride channel” in the nerves of insects that does not exist in mammals.

Dr. Sheele is not advising bedbug-tormented Americans to start eating Fido’s worm tablets. With only four volunteers, his study was tiny and preliminary, he emphasized. Neither the Food and Drug Administration nor any medical society has approved using ivermectin this way, and no one yet knows what the ideal antibedbug dose is. But ivermectin experts say his idea isn’t crazy. “Maybe partially crazy,” said Dr. Peter J. Hotez, dean of the National School of Tropical Medicine at Baylor College of Medicine. “But not entirely crazy.”

Dr. Hotez’s hesitation is mostly that bedbugs, unlike body lice and worms, do not cause disease, so xenointoxication seems heavy-handed. But many Americans, including many New Yorkers, are so terrified of the bugs that they have spent thousands of dollars fighting them, so ivermectin could be cost-effective.

Brian D. Foy, a virologist at Colorado State University’s veterinary school, has shown that it also kills mosquitoes, and so could be used against malaria. His initial reaction to using it against bedbugs was that he thought it would be easier to clean one’s house and throw out one’s mattress. “But maybe that’s just my ignorance about bedbugs,” he admitted. “We don’t have them out here in Colorado.” (Local news reports do not back him up on that.) “Needless to say,” he correctly pointed out, “this isn’t going to solve the problem of bedbugs in hotel rooms.”

Dr. Sheele speculated that ivermectin might be best used in combination with current measures like pesticides, desiccant powders, mattress covers, heat treatment, steaming and vacuuming. While it might not work alone, it could give exterminators a head start.

Dr. Frank O. Richards Jr., a parasitologist at the Carter Center in Atlanta who has spent years running programs in Africa and Asia that give out ivermectin donated by Merck to fight river blindness, said he was “excited to see how this plays out.” Americans might be initially squeamish about deworming pills, he said, but the country does have “a lot of worried rich people who don’t like bug bites.” He has tracked women in his river-blindness programs who took ivermectin before realizing they were pregnant, he said, “and all their babies were cool.”Nonetheless, he said, even though one 2002 study found a huge dose to be safe, which theoretically means that multiple small ones also would be, “as a physician, I’d be very concerned about an off-label use like that.” “If I gave that out, and something happened,” he continued, “I would not have a leg to stand on in court.”

Because each bug feeds only occasionally, he said, “I don’t buy that a week would do the trick. I think you’re going to need two, three, four weeks. And that’s concerning. We don’t have any toxicity data like that.” Like Dr. Sheele, he favors more testing of multiple doses.

Ivermectin is not cheap. In the United States, a typical adult dose of Stromectol is about $40, and no generic version is sold legally. A year’s supply of Heartgard for a big dog can cost more than $100.  But, Dr. Sheele said, that pales beside the price of multiple visits by a team of exterminators. He got interested in bedbugs, he said, because they plagued so many of his Norfolk, Va., emergency room patients. “I even had one patient come in with a baggie full of them,” he said. “As a physician, there’s nothing you can do for them except give them Benadryl and steroids for the itching.”

He knew about ivermectin’s power to kill skin parasites because he had done a fellowship in international emergency medicine, he said. His school provided financing but was nervous about letting him officially import bedbugs to campus, so he had to borrow the lab of a tick researcher at Old Dominion University. (Mr. Tran remembers it as humid and redolent of lab rats.) Eastern Virginia Medical School also wanted animal studies before he recruited medical students, so he dosed mice first; in that case, 86 percent of the bedbugs died. Now he hopes to find support for a full-fledged clinical trial. And he is working on a new project: If xenointoxication kills bedbugs, he surmised, how about ticks?

The parasite-host relationship isn’t as predictable as it is between bedbugs and their dinner. But the stakes are higher, since ticks carry serious diseases like Lyme and babesiosis.“It could be interesting for people who have to spend a lot of time in the woods — like soldiers,” he said.

Meanwhile, Mr. Tran and An Teng, another medical student and study participant, are enjoying their new notoriety. “My friends were completely grossed out that I let myself be bitten,” said Mr. Tran, whose rash from the bites lasted for a month. “But working on something so relevant to society caught my attention.”

PrevPreviousA Lesson for Paramedics: How to Treat Dogs Who Work in a War Zone
NextAPCC Looks Back at 2012Next