Paying the Price of a Fat Pet 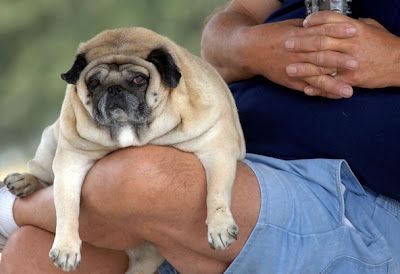 In the year before she died, Lacey, a white German shepherd, was crippled by a weight problem and hip dysplasia, barely able to walk. Her owner, Myrle Horn, had paid little attention to her diet, feeding Lacey plenty of food because “she always wanted more.” It was only toward the end, when Lacey’s extra weight seemed to worsen her hip condition, that Ms. Horn began to cut back on her food. “It was a horrible tragedy,” said Ms. Horn, 79, a food writer who lives in Florida. “I had to have a vet come to the house to put Lacey down because I couldn’t get her up and I couldn’t get her out.” Convinced that Lacey’s weight worsened her quality of life,

Ms. Horn became more diet-conscious with her next white shepherd, Gypsy, and now is vigilant about keeping the dog’s weight at a lean 60 pounds. Ms. Horn monitors her calorie intake, feeding her things like fish oil, spinach, zucchini and turkey breast. “The last year of Lacey’s life was horrible,” she says, “and I swore to Gypsy that I would never let her end up like that.”

As the number of Americans who are overweight has grown, studies show that they have gained some four-legged company. About half of all dogs and cats in American homes are overweight or obese, up slightly from 2010, according to a recent study by the Association for Pet Obesity Prevention. In a nation of 170 million pets, many of them as beloved as children, that means that roughly 85 million are carrying too much weight. And many pet owners are finding that the extra pounds on a pudgy cat or dog can lead to severe – and costly – health problems.

“Seeing animals suffering from health conditions secondary to their obesity is a common situation,” said Dr. Louise Murray, vice president of the Bergh Memorial Animal Hospital, run by the American Society for the Prevention of Cruelty to Animals, in New York. Just as diabetes and heart disease are more common in people who are obese, these diseases also are more common in overweight animals. The average cost of veterinary care for a diabetic dog or cat in 2011 was more than $900, according to Petplan USA, a pet insurance company. Treatment for arthritis and cruciate ligament tears, which can be caused by the strain of an overweight frame that weakens joints, especially in dogs, cost pet owners an average of $2,000. In 2011 alone, pet insurance claims for diabetes increased by 253 percent, according to Petplan. Claims for heart disease rose by 32 percent, while claims for arthritis soared by 348 percent.

Some of the most popular breeds – golden retrievers, German shepherds, Yorkshire terriers – are susceptible to orthopedic problems for genetic reasons, but these problems occur earlier and more severely with pets that are overweight, said Dr. Jules Benson, vice president of veterinary services at Petplan. Dr. Benson said it is not uncommon to see dogs that are rendered practically immobile by a combination of weight and joint or bone issues. “The most heartbreaking thing is having to put a pet to sleep just because it can’t mechanically get around anymore,” he said. “They’re otherwise alert and healthy, but their quality of life becomes so low that you have no choice but to put them to sleep.” Many people find their chubby cats and dogs amusing. But where pet owners see humor in a hefty ball of fur, veterinarians like Dr. Murray of the A.S.P.C.A. see problems that can cause suffering and a shortened life span. “People may have a sense that their pet is overweight but won’t always realize the consequences,” she said. “An owner might say about their cat, ‘I don’t understand why Fluffy’s coat looks so terrible, why she has these mats over her back and has this smell,’ and I have to point out to them that she’s too overweight to groom herself.” The problem in pets mirrors that in overweight humans, often stemming from lack of exercise and too many snacks and calorie-dense foods – or, in this case, treats and table scraps – between meals.

For veterinarians, broaching the subject of an overweight cat or dog with owners can be a delicate task. Some respond defensively or see it as a reflection of their lack of exercise and struggles with the scale. Bringing it up with an owner requires just as much finesse as pointing out someone’s own weight gain. “It can be a sensitive issue,” Dr. Murray said. “People feel defensive, as though they’ve done something wrong – that their pet is suffering discomfort because of something they did. It’s not something where you can just leap in and be blunt. You have to be very delicate.” But getting a portly pet back into shape can carry risks of its own. Hammering the pavement with an overweight lab or boxer that also happens to be arthritic can worsen the condition and cause cruciate ligament tears, akin to an A.C.L. injury in humans, which can happen all too easily in dogs, said Dr. Carol McConnell, chief veterinary medical officer for VPI Pet Insurance.

Pet owners should consult with a veterinarian before putting a pet on a diet. Putting a cat on a strict diet without medical supervision is risky, because cats’ metabolism cannot handle calorie restriction. Unlike dogs, which evolved to hunt as packs and can go days without eating, “cats are usually single predators,” Dr. McConnell said. “They nibble, they eat whatever they can find. They don’t do too well with starvation.” In cats, severe calorie restriction can signal the body to send stores of fat to the liver, where they can be converted to glucose. But over time, the liver is deluged with fat deposits, crowding out the normal cells of the liver and causing hepatitis. “If you suddenly change something too drastically, they can get into trouble,” said Dr. McConnell. “You want to make sure the pet is healthy either for calorie restriction or for an exercise plan. Whatever you do, you need to do it gradually.”