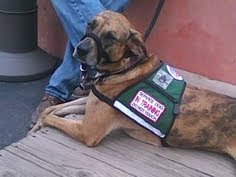 Any veteran from any war knows the suffering involved with Post Traumatic Stress Disorder (PTSD). And now with so many returning men and women from Iraq and Afghanistan, the numbers of veterans in our country with PTSD is staggering. Add the frequent incidents with IED’s (Improvised Explosive Devices), and you have a significant increase in Traumatic Brain Injuries (TBI) as well. Both disabilities often come together, and insurance companies do not cover the use of service dogs to assist the veteran with symptoms associated with PTSD and TBI. Thus, to obtain such a dog, one would have to provide at least $10,000 to $30,000 or spend countless months seeking grant money to cover it. For a veteran to complete the Paws and Stripes™ program, the cost is a flat $2000. Furthermore, Paws and Stripes™ covers this cost, and the veteran never pays a penny of it.

Jim Stanek, one of the founders of Paws and Stripes™, was sent home from his third tour in Iraq for injuries he received on deployment. After nine months in treatment at Brook Army Medical Center in San Antonio, TX, Jim discovered that the most comfort and relief he found was in the presence of therapy dogs. In May of 2010, Jim and his wife tried to obtain a trainer for their rescue dog, Sarge. They soon found out how difficult and expensive this process is. After being either turned down or unable to pay for service dogs from multiple organizations, the two looked at one another and agreed to start their own organization for veterans. Incorporated in June of 2010, Paws and Stripes™ was born. Now, he has trained his own service dog, a process that he has found rewarding, relaxing, and more effective than any pill or therapy session.

Many service dog providers require that an individual accept a service dog that has already been bred and trained according to their principles. Therefore, with these providers, the veteran would have no say in which dog they are given. Paws and Stripes™ allows the veteran to choose their own dog, then train the dog with the professional trainers from A Fresh Perspective Dog Training. Involving the veteran in every aspect of the program facilitates healing, builds self-esteem, increases the bond with the dog, and provides the veteran with the tools to maintain the dog’s training long after graduation.

With homeless dogs and over-populated shelters all over the country, Paws and Stripes™ does not breed puppies for the program, nor does it use any breeders as a resource. The organization works with the veteran until they find the dog that is the perfect fit from local shelters and foster homes.
All in all, Paws and Stripes strives to bring peace and normalcy to the lives of our nation’s heroes and see that homeless dogs find a loving home –
and that both may find a new purpose in life.

What makes Paws and Stripes™ Unique

The Veteran is a part of the training of the service dog from the first day; they work with professional trainers of A Fresh Perspective Dog Training contracted by Paws and Stripes™ on a weekly basis

Dogs that have graduated from the Paws and Stripes™ program are NOT pets, they are working service dogs and are protected by the rights set forth in the Americans with Disabilities Act