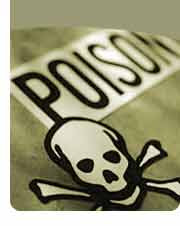 With various dangers lurking in corners and cabinets, the home can be a minefield of poisons for our pets. In 2008, the ASPCA Animal Poison Control Center (APCC) in Urbana, IL, handled more than 140,000 cases of pets exposed to toxic substances, many of which included everyday household products. Don’t leave it up to Fido or Fluffy to keep themselves safe. Below is a list of the top ten pet poisons that affected our furry friends in 2008.

Human Medications
For several years, human medications have been number one on the ASPCA’s list of common hazards, and 2008 was no exception. Last year, the ASPCA managed more than 50,000 calls involving prescription and over-the-counter drugs, such as painkillers, cold medications, antidepressants and dietary supplements. Pets often snatch pill vials from counters and nightstands or gobble up medications accidentally dropped on the floor, so it’s essential to keep meds tucked away in hard-to-reach cabinets.

Insecticides
In our effort to battle home invasions of unwelcome pests, we often unwittingly put our pets at risk. In 2008, our toxicologists fielded more than 31,000 calls related to insecticides. One of the most common incidents involved the misuse of flea and tick products—such as applying the wrong topical treatment to the wrong species. Thus, it’s always important to talk to your pet’s veterinarian before beginning any flea and tick control program.

People Food
People food like grapes, raisins, avocado and certain citrus fruit can seriously harm our furry friends, and accounted for more than 15,000 cases in 2008. One of the worst offenders—chocolate—contains large amounts of methylxanthines, which, if ingested in significant amounts, can cause vomiting, diarrhea, panting, excessive thirst, urination, hyperactivity, and in severe cases, abnormal heart rhythm, tremors and seizures.

Rodenticides
Last year, the ASPCA received approximately 8,000 calls about pets who had accidentally ingested rat and mouse poisons. Many baits used to attract rodents contain inactive ingredients that are attractive to pets as well. Depending on the type of rodenticide, ingestions can lead to potentially life-threatening problems for pets, including bleeding, seizures and kidney damage.

Plants
Common houseplants were the subject of nearly 8,000 calls to the Animal Poison Control Center in 2008. Varieties such as azalea, rhododendron, sago palm, lilies, kalanchoe and schefflera are often found in homes and can be harmful to pets. Lilies are especially toxic to cats, and can cause life-threatening kidney failure even in small amounts.

Household Cleaners
Everybody knows that household cleaning supplies can be toxic to adults and children, but few take precautions to protect their pets from common agents such as bleaches, detergents and disinfectants. Last year, the ASPCA received more than 3,200 calls related to household cleaners. These products, when inhaled by our furry friends, can cause serious gastrointestinal distress and irritation to the respiratory tract.

Heavy Metals
It’s not too much loud music that constitutes our next pet poison offender. Instead, it’s heavy metals such as lead, zinc and mercury, which accounted for more than 3,000 cases of pet poisonings in 2008. Lead is especially pernicious, and pets are exposed to it through many sources, including consumer products, paint chips, linoleum, and lead dust produced when surfaces in older homes are scraped or sanded.

Fertilizer
It may keep your grass green, but certain types of fertilizer can cause problems for outdoor cats and dogs. Last year, the ASPCA fielded more than 2,000 calls related to fertilizer exposure. Prevention is really key to avoiding accidental exposure, but if you suspect your pet has ingested something lawn-side, please contact your veterinarian or the Animal Poison Control Center’s 24-hour hotline at (888) 426-4435.