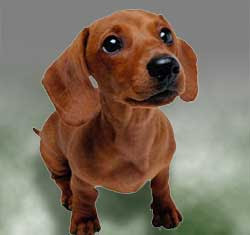 Researchers studying what dogs like to eat have found that the appetite of pet dogs is affected by the taste, texture and smell of the food, and also by the owners’ food preferences, their perception of their pet, and the physical environment in which the dog is eating.

Scientists have discovered that dogs can smell the presence of autism in children.

‘Seizure Alert’ dogs can alert their owners up to an hour before the onset of an epileptic seizure.

Seventy percent of people sign their pet’s name on greeting cards and 58 percent include their pets in family and holiday portraits, according to a survey done by the American Animal Hospital Association.

Small dogs are rapidly gaining popularity, according to American Kennel Club registration statistics. Three toys breeds are among the top 10 in popularity on the most recent list: the Yorkshire Terrier, Chihuahua, and Shih Tzu rank sixth, ninth, and 10th, respectively. A decade ago, no toy breeds were in the top 10.

The calories burned daily by the sled dogs running in Alaska’s annual Iditarod race average 10,000. The 1,149-mile race commemorates the 1925 “Race for Life” when 20 volunteer mushers relayed medicine from Anchorage to Nome to battle a children’s diphtheria epidemic.

The Canary Islands were not named for a bird called a canary. They were named after a breed of large dogs. The Latin name was Canariae insulae – “Island of Dogs.”

The common belief that dogs are color blind is false. Dogs can see color, but it is not as vivid a color scheme as we see. They distinguish between blue, yellow, and gray, but probably do not see red and green. This is much like our vision at twilight.

The dachshund is one of the oldest dog breeds in history (dating back to ancient Egypt.) The name comes from one of its earliest uses – hunting badgers. In German, Dachs means “badger,” Hund is “hound.”