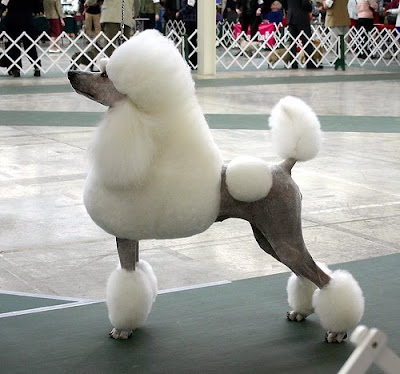 French poodles did not originate in France. Poodles were originally used as hunting dogs in Europe. The dogs’ thick coats were a hindrance in water and thick brush, so hunters sheared the hindquarters, with cuffs left around the ankles and hips to protect against rheumatism. Each hunter marked his dogs’ heads with a ribbon of his own color, allowing groups of hunters to tell their dogs apart.

Inbreeding causes 3 out of every 10 Dalmatian dogs to suffer from hearing disability.

It has been established that people who own pets live longer, have less stress, and have fewer heart attacks.

Korea’s poshintang – dog meat soup – is a popular item on summertime menus, despite outcry from other nations. The soup is believed to cure summer heat ailments, improve male virility, and improve women’s complexions.

Lassie was played by several male dogs, despite the female name, because male collies were thought to look better on camera. The main “actor” was named Pal.

Lassie, the TV collie, first appeared in a 1930s short novel titled Lassie Come-Home written by Eric Mowbray Knight. The dog in the novel was based on Knight’s real life collie, Toots.

Most pet owners (94 percent) say their pet makes them smile more than once a day.

Pekingese dogs were sacred to the emperors of China for more than 2,000 years. They are one of the oldest breeds of dogs in the world.

Prairie dogs are not dogs. A prairie dog is a kind of rodent.

President Franklin D. Roosevelt’s most famous canine companion was his Scottish Terrier, Fala, who is part of the Roosevelt Memorial in Washington, D.C. But during Roosevelt’s 12 years and one month as president, 11 dogs lived in the White House. They included a Bullmastiff, two red setters, a retriever, a Bulldog, a Llewellin Setter, a Scotch Terrier, a Great Dane, a Sheepdog, and a German Shepherd who tried to rip the pants off the British Prime Minister.