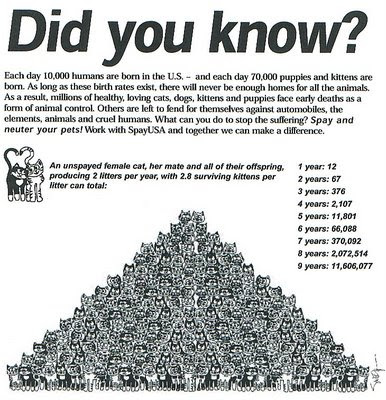 If left to her own devices, a female cat may have three to seven kittens every four months. This is why population control using spaying and neutering is so important.

If your cat is in the habit of rolling over and exposing his stomach, you can be sure he feels perfectly safe with you. It’s also a way of demonstrating his pleasure in your company.

If your cat snores, or rolls over on his back to expose his belly, it means he trusts you.

In addition to using their noses, cats can smell with the Jacobson’s organ which is located in the upper surface of the mouth.

In ancient Egypt, the entire family would shave their eyebrows off as a sign of mourning when the family cat died.

In cats, the calico and tortoiseshell coats are sex-linked traits. All cats displaying these coats are female… or occasionally sterile males.

In general, cats live longer than most dogs. An average life span might be 12 to 14 years. Some cats are reaching 20 or more. A cat’s longevity depends on feeding, genetics, environment, veterinary care and some other factors. It is also important whether or not the cat lives indoors or is allowed outdoors (outdoor cats live an average of eight years). The general consensus is that at about age seven the cat can be considered as “middle-aged”, and at age 10 and beyond – old.

In relation to their body size, cats have the largest eyes of any mammal.

In relation to their body size, cats have the largest eyes of any mammal.

In the 9th century, King Henry I of Saxony decreed that the fine for killing a cat should be sixty bushels of corn.

In the Middle Ages, during the Festival of Saint John, cats were burned alive in town squares.

In the midst of building the Grand Coulee Dam in the state of Washington, engineers were stymied by the problem of threading a cable through a pipeline until an anonymous cat saved the day. Harnessed to the cable, this unknown hero crawled through the pipeline maze to successfully finish the job.

It has been established that people who own pets live longer, have less stress, and have fewer heart attacks.

It has been scientifically proven that stroking a cat can lower one’s blood pressure.

It is a common belief that cats are color blind; but recent studies have shown that cats can see blue, green, and red.