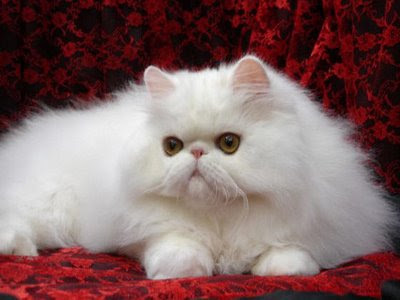 The only domestic animal not mentioned in the Bible is the cat.

The penalty for killing a cat, 4,000 years ago in Egypt, was death.

The Persian cat has the longest and thickest fur of all domestic cats. The topcoat may be up to 5 inches long.

The phenomenon of cats finding their owners in a place where they have never been before is scientifically known as Psi-trailing. Many well-documented stories tell of cats that have walked hundreds, even thousands of miles to find their owners.

The phrase “raining cats and dogs” originated in 17th Century England. During heavy downpours of rain, many of these poor animals unfortunately drowned and their bodies would be seen floating in the rain torrents that raced through the streets. The situation gave the appearance that it had literally rained “cats and dogs” and led to the current expression.

The red tabby cat is a Sarman.

The silver tabby cat is a Teku.

The Turkish Van, a very old rare breed that originated in Turkey, is quite different from other breeds because of its unusual love of water. Known as “the swimming cat,” the Van is strong, quick and agile. He makes a devoted and loyal companion–on land or at sea.

There are more than 100 million dogs and cats in the United States.

There are more than 500 million domestic cats, with either 35 different breeds (according to The Cat Fanciers Association, the world’s largest cat registry), or 38 breeds (as recognized by The International Cat Association, the second largest registry).

There is a species of cat smaller than the average housecat. It is native to Africa and it is the Black-footed cat (Felis nigripes). Its top weight is 5.5 pounds.

Those dark lines connecting to a cat’s eyes are called mascara lines.

To drink, a cat laps liquid from the underside of its tongue, rather than the top.

When you find your cat glued to the window intently watching a bird, making a strange chattering noise and clicking his or her jaws oddly, your cat is merely acting on instinct. What your cat is doing is directly related to the killing bite that all cats (both domestic and wild cats) use to dispatch their prey.

When your cats rubs up against you, she is actually marking you as “hers” with her scent. If your cat pushes his face against your head, it is a sign of acceptance and affection.

Winston Churchill, adored cats. Churchill used to refer to his cat, “Jock”, as his special assistant. “Jock” was reported to be on the bed with his master on the day the great British statesman died.

You can tell a cat’s mood by looking into its eyes. A frightened or excited cat will have large, round pupils. An angry cat will have narrow pupils. The pupil size is related as much to the cat’s emotions as to the degree of light.

You check your cats pulse on the inside of the back thigh, where the leg joins to the body. Normal for cats: 110-170 beats per minute.

Young cats can distinguish between two identical sounds that are just 18 inches apart at a distance of up to 60 feet.