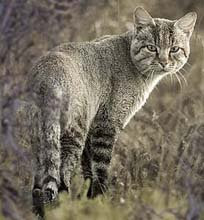 Not every cat gets “high” from catnip. Whether or not a cat responds to it depends upon a recessive gene: no gene, no joy.

Of all the species of cats, the domestic cat is the only species able to hold its tail vertically while walking. All species of wild cats hold their talk horizontally or tucked between their legs while walking.

One litter box per cat, plus an extra box, is the best formula for a multi-cat household.

Orange and lemon rinds are offensive to cats. A light rubbing of orange peel on furniture will discourage your cat from using it as a scratching post.

People who are allergic to cats are actually allergic to cat saliva or cat dander. If the cat is bathed regularly, allergic people have better tolerance to it.

Perhaps the oldest known female cat was Ma, from Devon, who was 34 when she died in 1957.

Purring is part of every cat’s repertoire of social communication, apparently created by the movement of air in spasms through contractions of the diaphragm. Interestingly, purring is sometimes heard in cats who are severely ill or anxious, perhaps as a self-comforting vocalization. But, more typically, it is a sign of contentment, first heard in kittens as they suckle milk from their mother.

Retractable claws are a physical phenomenon that sets cats apart from the rest of the animal kingdom. I n the cat family, only cheetahs cannot retract their claws.

Siamese cats originated in Siam—modern day Thailand. Legend has it that they were the companions of kings and priests and that they guarded temples. Some trace Siamese origins to Egypt and Burma, but many dispute this idea. Siamese were first brought to England in the late 1800s.

Siamese kittens are born white because of the heat inside the mother’s uterus before birth. This heat keeps the kittens’ hair from darkening on the points.
Sir Isaac Newton, who first described the principle of gravity, also invented the swinging cat door for the convenience of his many cats.

Tests done by the Behavioral Department of the Musuem of Natural History conclude that while a dog’s memory lasts about 5 minutes, a cat’s recall can last as long as 16 hours.

The ancestor of all domestic cats is the African Wild Cat, which still exists today.

The Ancient Egyptian word for cat was mau, which means “to see”.

PrevPreviousRoutine dentistry is the WAY TO GO!
NextMore Dog FactsNext