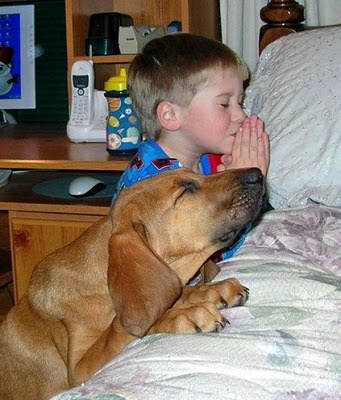 If imitation is the sincerest form of flattery, dogs often shower us with praise. New research has just determined dogs automatically imitate us, even when it is not in their best interest to do so.

The study, published in the latest Proceedings of the Royal Society B, provides the first evidence that dogs copy at least some of our body movements and behaviors in ways that are spontaneous and voluntary.

In other words, they can’t really help themselves when it comes to copying people.

“This suggests that, like humans, dogs are subject to ‘automatic imitation’; they cannot inhibit online, the tendency to imitate head use and/or paw use,” lead author Friederike Range and her colleagues conclude.

It’s long been known that humans do this, even when the tendency to copy interferes with efficiency.

In a scientific first, Range — a University of Vienna researcher in the Department of Cognitive Biology — and her team tested this phenomenon on dogs. Ten adult dogs of various breeds and their owners, from Austria, participated in the experiments.

All of the dogs received preliminary training to open a sliding door using their head or a paw. The dogs then watched their owners open the door by hand or by head. For the latter, the owner would get down on the floor and use his or her head to push up or down on the sliding door.

All of the dogs were inclined to copy what the owner did, even if it meant receiving no food reward.

“This finding suggests that the dogs brought with them to the experiment a tendency automatically to imitate hand use and/or paw use by their owner; to imitate these actions even when it was costly to do so,” the authors report.

The scientists suggest owners would do well to match their own body movements, whenever possible, to tasks at hand during training sessions.

For example, if an owner is trying to teach a dog to shake “hands,” the person might have more success if he stretched out his own hand to demonstrate. The observing dog would then be inclined to stretch out a paw, mirroring what the human did. At that point, a food reward could be offered to the dog, reinforcing the behavior.

The owner is reinforcing bonding and cooperation with the dog, too.

“Researchers have known that human beings prefer the behavior of other people who subtly imitate their gestures and other affects,” said Duane Alexander, M.D., director of the Eunice Kennedy Shriver National Institute of Child and Human Development.

Alexander worked on another study showing that non-human primates automatically imitate each other. Certain birds do this, too, but it may be very rare in the animal kingdom for one species to almost subconsciously imitate the behavior of a completely different species.

The dog-human bond may therefore have few, if any, parallels.

“Dogs are special animals, both in terms of their evolutionary history of domestication and the range and intensity of their developmental training by humans,” Range and her team explain.

“Both of these factors may enhance the extent to which dogs attend to human activity,” they added, “but the results of the present experiment suggest it is the latter — training in the course of development — which plays the more powerful and specific role in shaping their imitative behavior.”