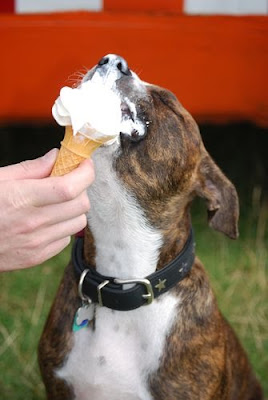 If a dog’s eyes appear to be riveted to you and your sandwich the next time you try to enjoy lunch, consider the clever, strategical intent of your rapt viewer. That’s because new research has just demonstrated dogs quietly sneak food when we’re not looking, waiting for the perfect opportunity to bite, steal and nosh.

Before every dog owner and lover reading this comments, “Duh! I knew that already,” the finding is not to be taken lightly. The research, published in the latest issue of Applied Animal Behaviour Science, adds to the growing body of evidence that dogs possess theory of mind, the ability to attribute mental states to oneself and others.

In other words, dogs can likely perceive what we see and know, allowing them to take advantage of us when opportunity arises.

Shannon Kundey of Maryland’s Hood College and colleagues tested the phenomenon out in a more structured, scientific way on 20 dogs*. To do this, they gave the dogs the opportunity to take food from one of two containers.

“These containers were located within the proximity of a human gatekeeper who was either looking straight ahead or not looking at the time of choice,” explained the scientists. “One container was silent when food was inserted or removed while the other was noisy.”

The vast majority of the dogs approached the silent container that was being pseudo ignored by the person.

The researchers then adjusted the experiment to see how dogs would react if the food container was noisy yet was still ignored by the nearby “gatekeeper,” or if the dogs weren’t particularly quiet when grabbing the snack.

According to the scientists, the “dogs preferentially attempted to retrieve food silently only when silence was germane to obtaining food unobserved by the human gatekeeper. Interestingly, dogs sourced from a local animal shelter evidenced similar outcomes.”

Aside from giving some props to shelter dogs, the study suggests that the food nabbing skills aren’t necessarily learned through repeated experience. The sneakiness may have evolved in wolves, the ancestors to dogs, and could therefore have genetic components.

We humans may also have an inborn drive to take food away from our dinner mates when they aren’t looking. Have you ever grabbed a French fry, piece of sushi, or some other small, yet tempting, item when a friend or relative has left the table?

Admittedly, I did that the other night. Sorry, Grace. The fried won-ton on your plate was good.