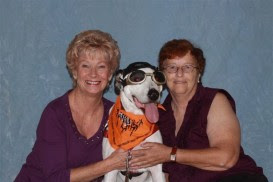 State Sen. Mike Fasano’s bill was inspired by a dog that took punches and kicks to protect his elderly owner from abuse.

A visit from a goggle-wearing dog with a dent in its head is the inspiration for a bill working its way through the state Senate. The dog had been beaten while trying to protect its elderly owner from an abusive son.

The proposed law by state Sen. Mike Fasano, R-New Port Richey, extends legal protection to pets of an abuse victim and makes beating or abusing the victim’s pet grounds for violating a court-ordered domestic violence injunction. It also would make abusing a pet covered under an injunction a crime.

“They use the animals for control,” Giordano said.

The measure was prompted by the dog that in 2005 was savagely beaten as he would sprawl over his owner’s body trying to protect her from her son, according to later newspaper accounts.

The woman’s son also threatened the dog if she didn’t comply with his wishes.

The beatings created an indentation in the dog’s skull and damaged nerves in his eyes that leave him with a sensitivity to light, requiring goggles for protection.

Now named Little Horatio, the dog doesn’t need the goggles as often as he used to, said Kathy Cornwell, the New Port Richey woman who adopted the Catahoula Leopard and gave him a new name along with a new home.

“If it’s very sunny, we’ll put the goggles on him,” she said. “He doesn’t like them but he’ll always have the nerve damage.”

Horatio is now about 8 years old and still shows some signs of his former life, said Cornwell, who, as Pasco County’s victim’s advocate for the Area Agency on Aging of Pasco and Pinellas, has seen plenty of abuse cases. He still gets nervous if left alone in a room for any length of time.

His first night in their home revealed how Horatio used to live and what the dog did to protect his owner.

“We put him next to the bed, and when my husband came in, he jumped up and covered my entire body even though he was shaking all over,” Cornwell said. “It took about a year to rehabilitate him.”

Fasano’s bill also adds a layer of legal protection for abuse victims and their pets by giving the person seeking a domestic violence injunction ownership of the pet.

“It gives the victim the ability to ask for control of the pet,” Giordano said.

That’s a large help in domestic violence cases when pets are pawns in the abuse, according to Cornwell.

A court order might force an abuser from the home but there was no way the victim could keep him or her from taking the pet, almost as a hostage, she said.

“I think it’s very important. I’ve seen too many people whose animals were taken and killed by the abuser,” she said.

This is the second try for Fasano’s proposal, SB 288 that ran out of time last session, Giordano said.

Horatio seems to have recovered from his earlier mistreatment, Giordano said.

“You’d think a dog like that would be really scared of people but he wasn’t,” he said.

Little Horatio, and not so little at about 75 pounds, still makes public appearances and Cornwell, along with Jane Occhiolini, a former victim’s advocate for the Pasco County Sheriff’s Office, give classes and talks about domestic abuse with Horatio.

PrevPreviousTracking a Subtle Scent, a Dog May Help Save the Whales
NextAdvice For the Colder Winter MonthsNext