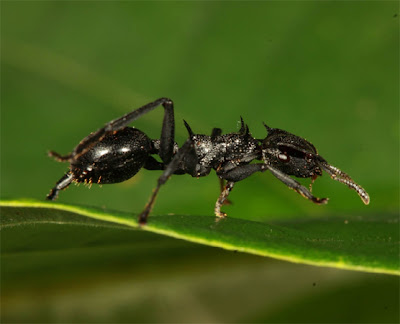 We already know some species of ants can solve puzzles, some species can do math, and others even have built-in GPS. Add the ability to fly — or glide — to safety, and ants are practically the superheroes of the insect world. And there’s no magic suit (or appendage) necessary.

The Cephalotes atratus species of tree-nesting ant can perform directed aerial descent, according to a recent article in Integrative and Comparative Biology. Simply put, when these ants find themselves falling from extreme heights through a forested canopy, they can zip themselves out of a free fall and back into the safety of the treetops — no wings necessary.

Gliding animals are nothing new to science. Fish, lizards and even snakes have been known to “fly” without wings. But what makes these ants so unique isn’t what they have, but what they don’t.

“In general, all the gliders that we know of have some aspect of their body shape that shows that they have some kind of aerodynamic potential… . But when you look at one of these ants there’s nothing obvious about it that would suggest that it should do anything but fall straight down,” said University of California at Berkeley researcher and PhD candidate Yonatan Munk, who co-authored the paper with Stephen P. Yanoviak and Robert Dudley.

Munk has been lugging specially designed wind tunnels into the Amazonian rain forest since 2007. With these vertical wind tunnels, researchers have been able to capture, on video, the exact movements that allow the ants to control their glides.

The key to directed aerial descent is in the back legs and rearend. C. atratus stretches its legs out, raises them, and then lowers its “gaster,” the posterior body segment: the butt. Voila! The ant has just become an aerodynamic, perfectly controlled backward-glider.

“It’s fairly similar to what human skydivers do — the principles are similar,” Munk said. “It creates a mini parachute out of your own body, heavy parts low, and light parts high.”

But how do these ants see where they’re going? As it happens, directed aerial descent is only possible in daylight and so far, research suggests that C. atratus is attracted to light-colored vertical objects. Munk says this makes sense, given the fact that many of the trees in the Amazon rainforest have trunks covered in white lichens.

Despite understanding the mechanics of the ants’ movements, researchers can only guess as to why this particular species of ant developed gliding skills, while others did not.

An ant that falls from a tree isn’t in danger of dying from the fall itself (although it can be hurt), but rather the conditions on the ground. During the rainy season of the Amazon, the ant could be eaten by a fish. In the dry season, it could be attacked by another species of ant.

They believe it comes down to the value of an individual worker to the colony as a whole. While hitting bottom in the rainforest doesn’t mean certain death, it still means a loss in productivity.

“Avoiding the forest floor only also makes sense if the loss of a worker represents a significant decrease in the colony to collect a resource,” Munk explained.

If that’s the case, Munk said he expected to find more species with similar abilities. The only difficulty, he said, is trying to identify which ants can and can’t fly with no obvious outward signs — until a researcher catches them in action.

PrevPreviousNational Veterinary Technician’s Week
NextTOP 6 WAYS TO TELL IF YOUR PET IS OVERWEIGHT!Next