Easing the Way in Therapy With the Aid of an Animal 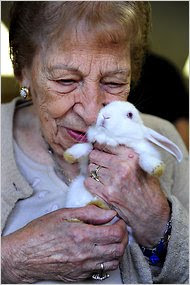 We’ve all seen guide dogs that can direct blind people around obstacles and tell them when it is safe to cross the street. Perhaps you also know of guide dogs for the deaf, which can alert people to a ringing phone, a doorbell or a smoke alarm, or dogs that can warn people with epilepsy of an incipient seizure, giving them time to get to a safe place before they lose consciousness.

Dr. Marty Becker, veterinarian and author (with Danelle Morton) of “The Healing Power of Pets” (Hyperion, 2002), tells of a golden retriever named Dakota, who was able to warn his master, Mike Lingenfelter, that a heart attack was imminent and alert Mr. Lingenfelter to the need to leave a stressful situation and take preventive medication.

“This dog is leading me through life,” Mr. Lingenfelter told Dr. Becker. “All I’m doing is following the dog.”

In recent decades, there have been countless such stories of animals helping to improve and even preserve the lives of children and adults with all manner of diseases and disabilities. Trained dogs are being used to help keep children with autism safe and to break the “freeze” that can afflict people with Parkinson’s disease when they try to walk. And dogs, cats, bunnies and birds are often brought to schools and institutions, as well as to hospitals and nursing homes, where they help to relax and inspire residents and distract patients from their health problems.

But the use of animals to enhance health can go well beyond individual cases and group settings. A growing number of psychotherapists are using therapy animals to facilitate treatment, especially treatment of children with emotional, social and even physical problems.

Among the pioneers is Aubrey H. Fine, psychotherapist and professor at the California State Polytechnic University in Pomona, whose extensive successful use of therapy animals in treating children is documented in “The Handbook on Animal Assisted Therapy” (Elsevier/Academic Press, 2010).

As Dr. Fine describes one of his first and most inspiring cases, 5-year-old Diane was brought to him because she recoiled in fright from strangers, and though she spoke at home, she refused to speak to anyone else, including her kindergarten teacher.

A trained therapy dog named Puppy eventually broke the back of her selective mutism. Diane was petting Puppy, smiling and content, when Dr. Fine gave the dog a signal to walk away. Diane was crestfallen, and seeing the girl’s distress, Dr. Fine told her that all she had to do to get the dog back was to say, “Puppy, come.” Softly, the child said, “Puppy, come, please come, Puppy.” That incident became the bridge Dr. Fine needed to help the child overcome her socially disabling problem.

He tells of another troubled child who finally began to speak about being physically abused when Dr. Fine told him that the misshapen therapy animal he was playing with had been rescued from an abusive home where it had been seriously injured. In another case in which a child was told where — and where not — to touch the therapy animal, the child opened up about being inappropriately touched, sexually abused, by a family member.

“Children are more likely to reveal inner thoughts to the therapist because the animal is right next to them and helps them express themselves,” Dr. Fine said in an interview.

In early work in a social skills program for hyperactive children, Dr. Fine found that they could be more easily taught how to behave calmly if allowed to handle his pet gerbil. “I realized this approach can have a tremendous impact in teaching because it helps to change how we relate to other beings,” he said.

Although the field of animal-assisted therapy has grown a lot in the last four decades, experts readily acknowledge that it suffers from a lack of well-designed research that can establish guidelines for safety and effectiveness in various situations. For example, although using dolphins to treat autistic children has received considerable media attention, at least two studies found no evidence of benefit and considerable risk of harm to the animals and to the children, said James A. Griffin of the National Institute of Child Health and Human Development.

The International Association of Human-Animal Interaction Organizations insists that members limit service and therapy animals to domestic species trained for the job. And the Delta Society, which provides training programs for the animals, will not certify wild or exotic animals like snakes, ferrets, lizards and wolf-hybrids. However, the Delta Society says it “is constantly expanding the range of species included in the Pet Partners program” when there is adequate research to document the safety of their use.

To help give the field a firmer scientific footing, the Mars company, a leading producer of pet foods, initiated a research partnership with the national institute branch of which Dr. Griffin is deputy director. Among continuing studies:

The effects of therapeutic horseback riding on children and adolescents with autism. If safe and effective, riding is less invasive than medications used to treat common symptoms like irritability and hyperactivity.

A large epidemiological study to document the overall public health effects on children and adolescents of living with dogs and cats.

Studies using survey and genetic tools to help select the most effective cats or cat breeds to work with autistic children.

Dr. Griffin acknowledged in an interview how difficult it can be to design a scientifically valid study using animals because “it can’t be a blind study — you know if the patient has a therapy dog.” But he described one recent study in which the patient, a young boy with autism, served as his own control. When he was with the therapy dog, levels of the stress hormone cortisol in the child dropped; the levels rose when the dog was taken away, and dropped again when the dog was returned. The next step would be to coordinate biochemical changes with behavioral effects — is the child calmer and easier to handle when with a therapy animal?

Dr. Fine emphasized the challenges of working with therapy animals as well as documenting its effectiveness. He said, “You can’t just bring in any animal to a therapy setting. The animal has to be very well trained, reliable, obedient and have the right temperament. It can’t be overly anxious or easily startled. And the therapist has to know how to use it as a therapy adjunct, in combination with good psychotherapy. The animal is there to help support what I’m doing, to act as a catalyst and not a distraction. And, of course, animal-assisted interventions have to be safe for everyone involved — the patient and the animal.”