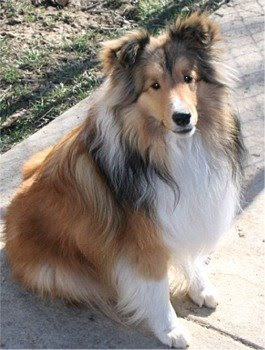 A dog’s whiskers are touch-sensitive hairs called vibrissae. They are found on the muzzle, above the eyes and below the jaws, and can actually sense tiny changes in airflow.

According to a recent survey, the most popular name for a dog is Max. Other popular names include Molly, Sam, Zach, and Maggie.

According to ancient Greek literature, when Odysseus arrived home after an absence of 20 years, disguised as a beggar, the only one to recognize him was his aged dog Argos, who wagged his tail at his master, and then died.

An American Animal Hospital Association poll showed that 33 percent of dog owners admit that they talk to their dogs on the phone or leave messages on an answering machine while away.
An estimated 1 million dogs in the United States have been named the primary beneficiary in their owner’s will.

At the end of the Beatles’ song “A Day in the Life”, an ultrasonic whistle, audible only to dogs, was recorded by Paul McCartney for his Shetland sheepdog.

Barbara Bush’s book about her English Springer Spaniel, Millie’s book, was on the bestseller list for 29 weeks. Millie was the most popular “First Dog” in history.

Before the enactment of the 1978 law that made it mandatory for dog owners in New York City to clean up after their pets, approximately 40 million pounds of dog excrement were deposited on the streets every year.

Cats have better memories than dogs. Tests conducted by the University of Michigan concluded that while a dogs memory lasts no more than 5 minutes, a cat’s can last as long as 16 hours – exceeding even that of monkeys and orangutans.

Cats have more than one hundred vocal sounds, while dogs only have about ten.

Cats, not dogs, are the most common pets in America. There are approximately 66 million cats to 58 million dogs, with Parakeets a distant third at 14 million.

Contrary to popular belief, dogs do not sweat by salivating. They sweat through the pads of their feet.