Do Cat Families Have a Hierarchical Structure? 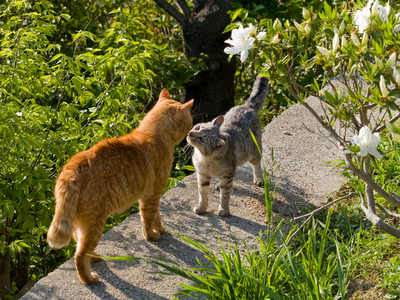 Watched your cats bossing each other around? One of them is probably top cat. Find out why. If you have more than one or two cats and are an astute observer of feline behavior, you’ve noticed that cats do seem to adhere to established feline social structures. One of your cats may have “Alpha Cat” status, with other cats deferring to him. You may find pairs of your cats choosing to relax in proximity to each other to the exclusion of other cats, and each of your cats may have established her own “territory” however small it may be.

Traditionally, Cats Were Not Thought to Be a Social Species until fairly recently, cats were not thought to be a social species. A social species is one whose members form “stable relationships,” as dogs do within their packs. For years, scientists considered lions to be the only true social cats with a hierarchical structure within their prides. Later, they discovered that cheetahs and bobcats had unique social structures, and more recently, that the domestic cat family (whether feral or house cats) has an established social hierarchy. Although some cats require a solitary lifestyle, others are content to live in small groups, particularly if all of the cats are neutered. Many pet cats thrive in the company of other cats especially if they have grown up among other cats. Though its ancestors may have led asocial lives, the domestic cat has evolved into a far more sociable animal both in a feral and a household setting.

As recently as the 1970s, scientists viewed feral colonies as consisting of nothing more than a number of individual cats drawn to a common food supply, generally tolerating other cats in the area. The prevailing theory was that the cats’ attraction to food was stronger than the instinct to fight off other cats. Since the cats did not exhibit well-established social behavior in the same way that dogs did, scientists assumed that they were unsociable. Many cat owners knew otherwise.

Feral Colonies Exhibit a Complex Matriarchal Hierarchy. In the years since those early studies, scientists studying the social behavior of cats have found that domestic cats, like lions, are definitely social cats with established cat social structures including complex matriarchal hierarchies similar to the lion prides. In feral colonies, observers have noted that related females in colonies are sometimes bonded so closely that they will den together when birthing, act as midwives for each other, and nurse each other’s kittens, with kittens being raised cooperatively by all of the females. The mothers even join forces to drive off intruders and threats to the colony, including fighting off tomcats seeking to kill kittens so that the females can be brought back into estrus.

House Cats Also Follow a Social Hierarchy. In multicat households, domestic cats also adhere to a hierarchical structure, although it’s more complex. In neutered colonies, the feline buddy system is not restricted to closely related cats and there seem to be no gender preferences. Studies over the last 30 years suggest that cats develop complex matriarchal hierarchies and that they have preferred buddies. Even strictly indoor cats have both hierarchy and territories. For example, you may have a cat who rules the couch, and another who favors the love seat, and neither will cross into the other’s kingdom unless they are bonded pairs. Upheavals occur when a new cat joins the household and must carve out a new territory for himself. This usually requires that the resident cats adjust their boundaries, sometimes by force.

When a cat in the household dies, her old territory will be annexed by another cat, usually the next one down in the hierarchy. Behavior patterns in a household of cats may change when another dies or leaves. A shy cat may assume a higher spot in the hierarchy and adopt behaviors consistent with that higher status.

Rubbing Establishes Hierarchy. How often does your cat greet you by rubbing her body affectionately against your legs? It’s your cat’s way of letting you know that you rank higher than her in the household hierarchy. Cats rub against their companions to mingle their scents and reinforce their bond. A cat’s social standing can be measured by how often other cats rub against her. Cats higher up the hierarchy are rubbed against a lot, while lower ranking cats do most of the rubbing. So as you observe your own little house lions, take note of the feline social hierarchy within your household. Understanding it can prove useful in resolving behavior issues like inappropriate marking or territorial disputes between your cats. The napping tabby at the end of your couch sees himself as a fierce lion protecting his territory at the north end of the living room. Understanding that role can help you preserve household harmony.