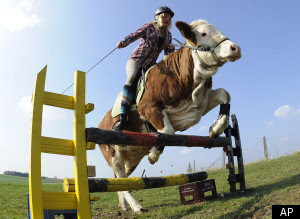 LAUFEN, Germany (AP) — When Regina Mayer’s parents dashed her hopes
of getting a horse, the resourceful 15-year-old didn’t sit in her room
and sulk. Instead, she turned to a cow called Luna to make her riding
dreams come true.

Hours of training, and tons of treats, cajoling and caresses later,
the results are impressive: not only do the two regularly go on long
rides through the southern German countryside, they do jumps over a
makeshift hurdle of beer crates and painted logs.

“She thinks she’s a horse,” the golden-haired Mayer joked on a recent
sunny afternoon as she sat atop the impassive brown-and-white,
grass-munching cow.

It all started about two years ago, shortly after Luna was born on the
Mayers’ sprawling farm in the hamlet of Laufen, just minutes from the
Austrian border.

They started off with walks in the woods during which Luna wore a
halter. Then Mayer slowly got her cow more accustomed to human contact
and riding equipment.

About six months later, it was time to see how Luna would respond to a
rider on her back. Mayer sat in the saddle, and all went as planned –
at least at first.

“She was really well behaved and walked normally,” said Mayer, decked
out in riding gear. “But after a couple of meters, she wanted me to
get off! You could see that she got a bit peeved.”

Luna and Mayer are now soul mates, spending most afternoons together
once the teen – who aspires to become a nurse one day – comes home
from school.

Their extensive routine involves grooming, petting, jumps and a
roughly one-hour ride. That’s also the case in winter, when Mayer
lovingly drapes a blanket over Luna to keep her warm.

Her efforts have paid off.

Now, Luna understands commands such as “go,” `’stand” and “gallop.” If
she feels like it, that is.

“When she wants to do something she does it, when she doesn’t, she
doesn’t,” said Mayer, who proudly says Luna thinks of her as her
mother. “And she’s often very headstrong but can also be really
adorable.”

Luna’s stubborn streak meant that teaching her pony tricks wasn’t
always easy, Mayer noted, saying she sought tips from a cow expert in
Switzerland on how to deal with “steering” problems.

Anne Wiltafsky, who trains cows near the Swiss city of Zurich, said
Luna’s talents are not particularly surprising and that, historically,
it was quite common to ride cows and use them as workhorses.

“Especially younger ones can jump really well,” Wiltafsky said in a
telephone interview, adding that cows are lovable companions because
they’re easygoing, have strong nerves and are “unbelievably devoted”
to people they like.

Being – and owning – a cow-turned-pony isn’t always easy.

Take the somewhat skeptical neighbors, such as Martin Putzhammer, who
had to be won over.

“At first I thought it was kind of weird – a kid on a cow?” the
17-year-old said during a break from repairing his moped. “Had to get
used to it but once I did I thought it was pretty funny.”

While Mayer’s friends quickly warmed to her passion after laughing at
her, Luna’s fellow cows weren’t so open-minded.

“Cows don’t really like her … they’re jealous because she always
gets goodies,” Mayer said.

And horses? Many run away in fright, but others often join Luna on rides.

“She really enjoys that and gets totally into it,” Mayer said.

Mayer hasn’t given up her hopes of having a horse and may soon get
one. But she says Luna will always have a special place in her heart.

“She’ll stay my darling,” she said.