As you may have heard in the news, there is great concern about potential problems with JERKY TREATS causing serious, even potentially fatal problems in dogs.  Despite exhaustive studies, including trips to China to investigate production facilities and continual testing of jerky products, the FDA has been unable to find a link between the treats and the illnesses.  Is this all just internet/media hype or is there an underlying problem? We really do not know at this time.  The following article examines the issue in more depth.

Until we know more, it is probably best to avoid Jerky Treats for your dogs.
Call us if you have questions,Your Friends at Kingsbrook Animal Hospital

Seven years ago, Jordan Smith offered her two dogs a Christmas treat: pieces of chicken jerky. Within hours, Eugene, a 14-year-old wire-haired pointing griffon, and Choppy White, a poodle of uncertain age, had diarrhea and were vomiting. A week later, Choppy White died of liver failure.
Eugene hung on for a few more weeks but died in January 2007. The two dogs were among the first cases of pets apparently poisoned by chicken jerky dog treats.
“They immediately both got very ill, seriously ill,” said Ms. Smith, 41, a reporter at The Austin Chronicle in Austin, Tex. “I narrowed it down to this jerky because it was the only thing they had in common and it was within hours after they ate it.”
Ms. Smith eventually settled with the manufacturer of the pet treats under an agreement prohibiting her from revealing the company’s name. But she said she recently saw the product she believes poisoned her dogs still on sale.
Eugene and Choppy White are far from the only pets to suffer problems after eating jerky treats. The Food and Drug Administration has been investigating cases of suspected poisonings since 2007, with scant success. The agency updated the numbers last month: there have been more than 3,600 reports of illnesses associated with the treats and more than 580 deaths, almost all among dogs.
Dr. Richard E. Goldstein, the chief medical officer at the Animal Medical Center in New York, first noticed the problem in late 2006 or early 2007. “We’re still seeing patients now, and a lot of vets don’t know about it.”
The cause of the poisonings, if that is what they are, remains a mystery. About 60 percent of the cases nationwide involve 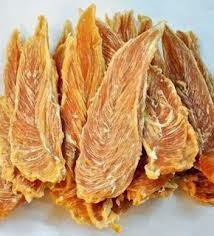 gastrointestinal illness; 30 percent, kidney ailments; and the rest, convulsions, tremors and skin irritations. Often the animals suffer from Fanconi syndrome, a kidney disease that is otherwise very rare in dogs. The breed or size does not appear to matter — Dalmatians and dachshunds, pugs and German shepherds, mutts and purebreds have all been affected.

Chicken is the most common ingredient in the products, but some also contain duck, sweet potatoes, yams and dried fruits. Many are manufactured in China, and in April 2012 F.D.A. officials inspected several factories there, gathering information on manufacturing processes, equipment, sanitation and product testing. They found nothing in any of the factories that would explain the poisonings.
They did find that one factory had falsified papers about glycerin, a common ingredient in the foods and not considered harmful in small quantities. Chinese authorities seized the firm’s products and suspended exports to the United States.

The New York State Department of Agriculture and Markets has been investigating, as well. Officials found low levels of antibiotic residues in some of these products and in January asked for a voluntary recall of several brands, including Waggin’ Train and Canyon Creek Ranch chicken jerky treats, both distributed by Nestlé.
Nestlé removed the products from stores in New York, but issued a statement asserting that the antibiotic residue does not pose a safety risk. A sharp decline in the number of complaints followed, but the F.D.A. agreed with Nestlé that antibiotics do not explain the problem and said that the reduced number of complaints probably reflected the smaller number of products available after the recall.
Still, the agency is continuing to test for possible contaminants. F.D.A. technicians ran 240 tests on samples collected from 2007 to 2011, and since then have collected about 250 samples connected to consumer complaints, plus 200 more bought at retail stores. The agency has performed more than 1,000 tests on these new samples.
Testing these products is not easy, according to Dr. Martine Hartogensis, deputy director of surveillance and compliance at the agency. “They’re very hard and dry, not soluble, more challenging than a raw or fresh product,” she said. “It’s harder to establish methods for testing them.” 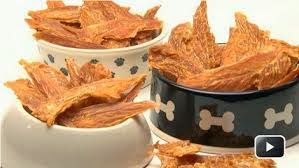 Nevertheless, F.D.A. technicians have searched for a variety of germs, toxins, drugs and other contaminants. They have screened samples for Salmonella, mold, yeast and fungus. They have tested for additives and preservatives like nitrites and sulfites, and for 19 food dyes. They have run screens for lead, zinc, titanium and almost two dozen other metals. They have used a gas chromatography mass spectrometer to search for toxic chemicals.
They found Penicillium species in one sample, and some other antibiotics in some samples, none in quantities large enough to cause disease or death. They found glycerin in some products that were mislabeled as containing none.
But after all this, the F.D.A. has found nothing that could explain the apparent poisonings.
“We have a staff in our office of research working on jerky pet treats exclusively,” Dr. Hartogensis said. “And through our veterinary lab network, we have numerous labs throughout the country working on it.
On Oct. 22, the agency appealed to veterinarians, asking them to report illnesses associated with jerky treats and to collect urine and blood samples. The F.D.A. has since received more than 1,000 reports, including many from veterinarians.
“We’ve put out a lot of consumer alerts,” said Dr. Hartogensis, “but this is the first time we’ve talked to vets, our eyes and ears out there. We’re trying to get samples from active cases where the animal is currently sick.
“We really need more tissue, urine and blood samples,” she said. “That’s where toxins are concentrated.”
This post has been revised to reflect the following correction:
Correction: November 5, 2013
An earlier version of this post misstated the circumstances under which Jordan Smith, whose two dogs were among the first cases of pets apparently poisoned by chicken jerky dog treats, reached an agreement with the manufacturer of the pet treats. She alerted the company to her dogs’ health issues and the company compensated her for her loss. She did not sue the company. In addition, after the recall she said she saw the product she believes poisoned her dogs still on sale under the same — not several different — brand name.

A version of this article appears in print on 11/05/2013, on page D6 of the NewYork edition with the headline: Concerns About Jerky Pet Treats .