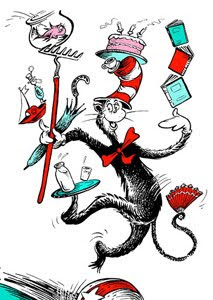 Arlene
Arlene is Garfield’s lady friend and one of the only ones in his comic that can match his wit. The big gap between her two front teeth give her all the personality she needs.

Azrael
Perhaps a lesser known cartoon cat, Azrael is Gargamel’s partner in crime as he plots to destroy the gleefully blue smurfs.

Bill the Cat
Bill doesn’t say much, due to the fact that he has a bit of a hairball problem. He is best known for making his noises at Opus in Bloom County.

Bucky
Bucky is an angry siamese cat with a razor sharp wit. He’s usually the smartest guy in the room and never lets the dog forget it in the Get Fuzzy comicstrip.

Cat in the Hat
Probably the most charismatic character of the Dr. Seuss books, the Cat in the Hat teaches us all to enjoy the ride.

Cheshire Cat
Perhaps the best part of Alice in Wonderland is the smarmy Cheshire Cat offering his brand of frustratingly useless advice.

Felix the Cat
This is one cat that doesn’t take life laying down, Felix the Cat is always up for a good laugh.

Garfield
Maybe one of the most widely known cat cartoon, Garfield is one cat with attitude. He isn’t interested in much, except lasagna, napping, lasagna, teasing the dog, oh, and did we mention lasagna?

Hello Kitty
The flagship character for Sanrio, Hello Kitty doesn’t say much, but her face pops up everywhere we look.

Hobbes
What Hobbes is depends on whose perspective you prefer. To Calvin, Hobbes is a playmate & confidant – to everyone else Hobbes is a stuffed tiger.

Penelope
Probably everyone has felt a little sympathy for poor Penelope as she is smothered in stinky kisses by none other than Pepe le Pew.

Pink Panther
The king of cool, Pink Panther started out as part of a title sequence and wound up becoming the most recognizable pink kitty in town.

Puss in Boots
This character comes from a French fable about a man who inherits an extraordinary cat (with a boot fetish no less) who has a plan for his unsuspecting master.

Sagwa
Little Sagwa is as sweet as she is cute. From the show named after her, Sagwa keeps us entertained as she learns from her own mistakes.

Scratchy
Bart & Lisa’s favorite show on The Simpsons, The Itchy & Scratchy Show pits cat & mouse against each other in a bloody statement about modern cartoons.

Simba
Everyone’s favorite lion, Simba’s story is a bittersweet one. However one thing is for certain, he was meant to be the Lion King

Snagglepuss
Best known for his catch phrase “Heavens to Murgatroyd” Snagglepuss is not the sharpest cat cartoon. This Hanna-Barbera’s creation and was first introduced on The Quick Draw McGraw Show

Snowball
Probably good friends with Bill the Cat, Snowball is best known for her hairballs and her random involvement in one of The Simpson’s latest schemes.

Stimpy
Definitely the dumbest cat on this page, Stimpy is not the sharpest tool in the shed. But he’s got to be pretty dim to share in Ren’s hair brained schemes.

Sylvester
With a catch phrase like “Thuffering Thuccotash” you wouldn’t believe Sylvester was bright, but we think he doesn’t really want to catch Tweety Bird.

Tigger
Definitely the most exciting member of Winnie the Pooh’s gang, Tigger is almost obnoxiously energetic.

Tom
Much like Sylvester, we think maybe Tom isn’t as interested in catching Jerry as he would have us believe.