Can Pets Predict the Weather, Among Other Things? 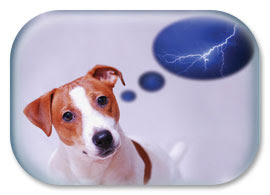 Summer means it is storm season. You may not have to check with the weather service to find out if lightning is about to strike, however. The answer could be curled up in your lap or resting at your feet. According to a survey by the Associated Press and Petside.com, more than two-thirds of dog and cat owners say they’ve received weather warnings from their pets. Even more surprisingly, almost half report they’ve been alerted to bad news by their animals. Do pets really have this mysterious “sixth sense”?

“It’s not that they have a sixth sense but that their senses are much more acute than those of humans,” says Dr. Nicholas Dodman, professor of animal behavior at the Tufts Cummings School of Veterinary Medicine.

“For example, a dog’s most highly developed sense is its ability to smell,” he explains. “We humans have something like 12 million olfactory receptors in our noses. Dogs can have up to 4 billion. So, it’s hardly surprising that they have an incredible ability to detect trace amounts of odors.”

“So, let’s suppose a storm is miles and miles away and lightning flashes. That may generate ozone molecules that travel in the breeze ahead of the storm. Your dog smells those and becomes agitated and starts to shake.”

“Then, when the storm hits, you think, ‘Oh, my goodness, my dog has a sixth sense!’”

“Storms are also preceded by pressure changes in the air,” says Dr. Ben Hart, a veterinarian at the University of California, Davis who has studied animal behavior for almost 50 years. “It’s possible that dogs and cats can pick up on these changes.”

Hart says animals that have been frightened by thunderstorms in the past will be especially attuned to all the stimuli that accompany them.

Static electricity might also play a role in an animal’s ability to “predict” the weather.

“People have reported getting shocks off their dogs during storms,” says Dodman. “That’s not unusual, considering that dogs are running around on insulated foot pads wearing the equivalent of a big furry angora sweater. They’re perfectly designed to acquire a static charge. So, when they touch their nose to something, they are shocked and will remember that painful experience.”

How do these scientists explain a dog or cat’s reported ability to foretell bad news?

“We tend to remember those things that impress us the most,” says Hart. “So, if our dog appears to warn us and something bad happens afterward, we’ll remember that. But we’ll forget the other hundred or thousand times he acted that way and we didn’t get bad news.”

He likens it to a baseball player who discovers a hole in his sock on the day of a big game. He hits a home run and wears a sock with a hole in it for the rest of his career.

If it’s any consolation, however, he says that dogs and cats make wrong connections, too.

“Your pet may be frightened by the smell of lamb cooking. That’s maybe because he once burned his nose on the stove and he associates that painful experience with the smell, not the hot burner.

“It’s easy for us to misinterpret what’s really going on,” Dodman adds. “Like when you’ve had a bad day at the office and come home and your dog puts his head on your lap. Your response is, ‘My dog knew I had a bad day at work.’ He didn’t. He just knew when you walked in the door that your posture was different and you looked sad. It’s your body language. Dogs can read you like a book.”

“It’s natural to assume more understanding and human sense than there is,” says Hart. “But when you say that to people like my sister, she’ll tell me, ‘No, Ben, you’re wrong. I know my dog really understands what I’m going through or what happened.’”

“You just can’t argue with that.”

How Do Pets Warn of Impending Danger?