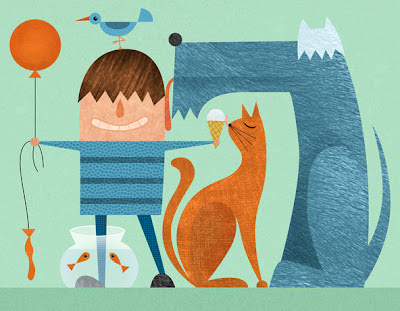 In this era of mommy confessionals, I must admit: I am not a pet person. With their allergic father, I have reared three children without benefit of in-house canines, felines or invited rodents. But with researchers beginning to focus on children and pets, I find myself interested, though occasionally cynical or defensive. Pediatricians are asked pet-related questions all the time. What’s the right age to care for a pet? The best way to discuss a pet’s demise? Do we get rid of the cat if one child is allergic to him? Will the dog bite the baby? For such a tremendously widespread phenomenon as pet ownership, there has been very little research to steer by.

But now researchers are looking at a range of questions, in normal child development, in childhood obesity, in traumatized children and in autism. Dogs, you might say, are having their day. The research is still limited, but the questions are intriguing, as scientists bring rigor to the study of emotional and psychological effects of pet ownership, along with traditional pediatric concerns of allergies, bites and infections. “There is evidence that some individual kids seem to benefit from their relationship with these animals,” said James Serpell, director of the Center for the Interaction of Animals and Society at the University of Pennsylvania. “Everyone wants to know what the mechanism is.” Many families acquire pets in the first place for the children’s sake, said Alan Beck, director of the Center for the Human-Animal Bond at Purdue University. “Why do you have an animal? A high percentage, because they believe it’s good for the kids — and it looks like it is, to some degree.” There’s a common conviction, for instance, that living with a pet teaches children skills they can use in their social interactions with other humans.

“The belief is that maybe animal-owning children are a little bit more aware unconsciously, have learned nonverbal communication,” Dr. Beck said. Gail F. Melson, emerita professor of human development and family studies at Purdue, cautions that cause and effect may go in the other direction. Maybe children with greater empathy skills are more likely to develop relationships with animals. The hope that children may learn empathy and communication skills from animals has led to speculation about pets in the lives of people with autism. Some children who have great difficulty with human social interactions can form deep bonds with animals. “There is some evidence, but it’s largely anecdotal, that bringing a dog into these households has a dramatic effect on the behavior of these kids,” Dr. Serpell said.

Other experts are trying to look objectively at the increasingly widespread practice of using dogs to calm or comfort children in stressful situations, usually medical or legal. Rebecca Johnson, director of the Research Center for Human-Animal Interaction at the University of Missouri, has begun a randomized clinical trial, financed by the National Institutes of Health, of children undergoing forensic interviews for child abuse; some are given a service dog during their interviews, and physiological indicators of stress are measured. “A lot of cities and municipalities are using service dogs in courtrooms for children,” she said. “I really want to identify whether it’s a stress reducer or not.” With so many children struggling with obesity, dog-walking is being investigated as a strategy to increase exercise in children — as some studies have shown it can do in adults. “This is a highly motivating physical activity, when children walk with a dog,” Dr. Johnson said. This is a departure from the scant discussion of pets decades ago among pediatric researchers, who tended to focus on risks.

A 1965 commentary in the journal Pediatrics, “Pets, Parasites, and Pediatrics,” claimed that “40 fairly frequent infections of children in this country” could be acquired from animals. And the advice that doctors have given can be based on personal prejudice, not evidence. In a study done in the 1980s of allergists, for example, those doctors who didn’t own pets were more likely to tell the families of allergic children to give up the animals. The connection between pets and allergies turns out to be particularly complex. Quite a few studies now suggest that early exposure to animals may have a protective effect. A recent review article that examined a large number of studies found evidence that in children with no family history of allergy, those exposed to dogs in the perinatal period may be less likely to develop allergies.

Pets affect so many children in so many ways — immune systems, developing social skills, exercise patterns, family circumstances. The effects may be positive, but it’s also true that families who choose to add a pet to the mix may be those who feel at least a small margin of comfort in income, living space and —perhaps above all, as I look at my own deficits — family organization and infrastructure. The strongest evidence of the importance of pets, Dr. Melson said, comes from children themselves, who often cite pets as sources of emotional support. “The animal is available when you come home from school,” she continued. “Some species will give you at least the illusion of unconditional acceptance — at least, if you have a treat in your hand.” At the same time, researchers invoke a range of less quantifiable but clearly important effects. Growing up with a pet “gives children a much more inclusive sense of self,” Dr. Serpell said. “I think it has implications for the relationship of people to the other beings on the planet.

PrevPreviousPaying the Price of a Fat Pet
NextDo Cat Families Have a Hierarchical Structure?Next