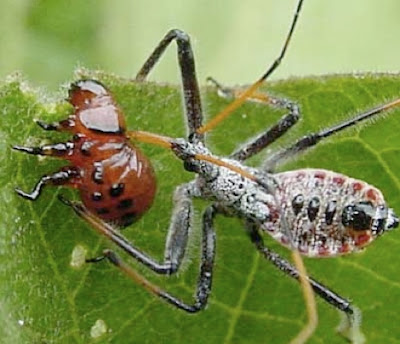 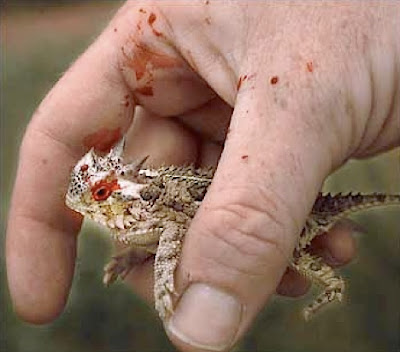 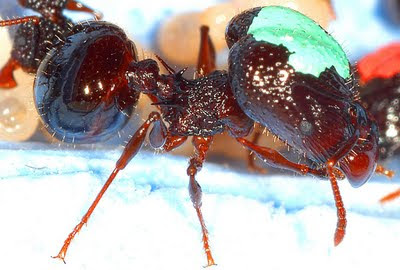 1. Malaysian Ants: When feeling threatened, these ants internally combusts causing their bodies to explode! Contracting their abdomen upon threat, sets off poison filled glands on the sides of their bodies that kills their enemies once they are close enough!

2. Hairy Frog: This weird amphibian purposefully breaks its own leg to signal its body to dispense cat-like claws that pierce through the frogs toe pads once feeling threatened! Their is debate among scientists on whether these claws are retractable or not.

3: Horned Lizard: As its name might imply, this little guy does not use its horns to defend itself. Instead it fills its sinus cavity with pressure upon threat until the blood vessels in its eye burst, spraying blood all over its enemy!

4: Potato Beetle: Look out for their babies! These specie’s little ones cover themselves in their own feces, which are highly toxic, to repel predators!

5: Bombardier Beetle: These small beetle use the power of their behind to ward off threats! It sprays boiling hot toxic bodily fluid from their anus that could nearly melt their enemies!

6: Hog-nose Snake: These smart serpents know how to play dead! They roll over onto their backs and pretend to be dead, in conjunction with excreting a foul odor, so that predators aren’t interested in eating them.

7. Sea Cucumber: Don’t let the harmless name fool you! This deceiving marine creature excretes sticky string-like filaments from its anus to capture predators and shoot toxins at it when attacked.

8. Larks: Ever try singing to an enemy? These courageous birds like to sing to predator birds when being chased as a warning that they will be difficult to capture so watch out!

9: Opossum: They are a creature of many talents! They defend themselves against predators by involuntarily going into a comatose-like state which is triggered by extreme fear making them look dead. Also, they will make themselves drool by working their jaw excessively which gives the signal to predators that it’s sick!

10: Hagfish: Suffocation by ooze…yikes! This strange fish oozes a slimy substance from its pores when under attack that engulfs its predator ultimately suffocating it.