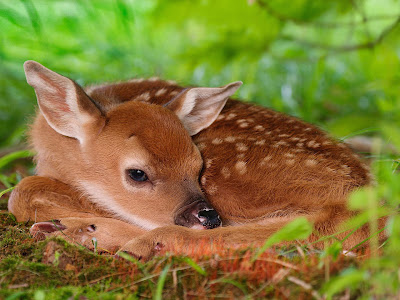 Sometimes the best of intentions have the worst of outcomes.

Lisa Fischer has seen it countless times. Saw it last week, in fact.

As the head of Suburban Wildlife Rescue and Rehabilitation Inc. in St. Mary’s County, she takes in injured and abandoned birds and mammals. But what to many is an abandoned animal is to her an animal that probably should have been left where it was.

That’s especially true of fawns. Last month, Lisa received two. One was an open and shut case, so to speak: It was found next to a dead doe. Without a mother, it needed Lisa’s help.

The other was found in the woods by someone who assumed the mother wasn’t coming back. “They were asked to put it back and didn’t want to put it back,” Lisa said. They said the site would soon be cleared for construction. They wouldn’t tell Lisa where the site was.

She tube fed the fawn. “I fought for a week,” Lisa said. “It died in six or seven days. . . . Had it been with mom, quite frankly it probably would have made it.”

She’ll care for the surviving fawn and release it in September.

What most people don’t realize is that a mother deer will leave her fawn alone for eight to 10 hours a day while it forages. The fawn can’t keep up with the mother. A fawn’s camouflage and lack of scent keep it pretty well hidden from predators.

If the mother returns to find her offspring gone, she’ll freak out. “She will search frantically for about three days for the fawn. So the best thing is to leave them alone,” Lisa said.

If the baby has flies buzzing around it or maggots on it, a wildlife rehabber should be called. Ditto if it’s obviously injured or dehydrated. Otherwise, let sleeping fawns lie.

Bunnies, too. “People don’t realize [rabbit] mothers only feed their babies at dawn and dusk,” Lisa said. If you think bunnies may be abandoned, sprinkle some flour around their nest and check back later to see whether mom has left footprints. “Bunnies do so much better in the wild,” Lisa said. “There’s only a 10 percent survival rate with rehabbers.”

This is a good time to remind people that baby birds probably don’t need our help, either. “A lot of people don’t realize that the little birds are on the ground for three days before they really fly. They’re simply on the ground, fully feathered, with their parents still taking care of them.”

Touching a nestling or fledgling will not make its parent abandon it. Most birds don’t have a sense of smell. If you’re concerned about the bird, simply put it back in its nest.

“It’s not for them,” Lisa said. “You really can’t give anything cow’s milk, other than a cow. And us, I guess.”

Cow’s milk causes diarrhea in fawns, squirrels and other mammals. It can kill them in a matter of days. (Convinced an animal is dehydrated? Try Pedialyte.)

Lisa got into rehabbing eight years ago when one of her kids found a squirrel. She earned her certification from Maryland’s Department of Natural Resources.

She’s actually cutting back on her efforts. It’s expensive. What with formula and fresh food, it costs about $175 to rehab a squirrel, close to $600 for a fawn.

“You’d be surprised how many people think it would be such a cool thing for their kids to raise a fawn,” Lisa said. “It’s not cool. I mean it’s cool, don’t get me wrong. They are beautiful animals.”

But they are also difficult. “They have to be stimulated to go to the bathroom,” Lisa said. “Not to mention it’s illegal to have it in your home, unless you’re permitted to have it. Ultimately, it’s the animal who suffers.”

Wait a minute. Back up. They have to be stimulated to go to the bathroom?

That’s right, Lisa said. Mother deer lick their babies to get them to poop and pee, something Lisa approximates with a wet washcloth. You can imagine the results. Lisa spends a lot of time washing her clothes.