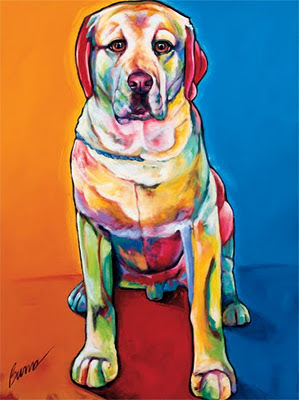 Until September 11, 2001 I was content painting the dogs and cats I met at shelters from around the country as well as commissioned works for collectors. However, on that morning, after going on a morning run I returned to the tragic news that we are now all so familiar with.

As I watched the events unfold I saw the story of Sirius, the explosive-detection dog that lost his life in Tower II. I had this overwhelming feeling to reach out to David Lim and do something to try and ease his pain. I searched the internet for a contact and actually found an email address for him and thought I would give it a try. It worked. We connected and David was kind enough to share stories and pictures of Sirius with me. I could tell they truly loved and watched out for each other. And that is how I came to paint Sirius.

As I began to better understand the role Sirius played at the World Trade Center, my curiosity got the best of me wanting to know more about the dogs that were committing their lives towards the devastation and so dedicated to us humans. So I went to the people I knew, at the ASPCA and The HSUS, asking for any information they might have. The next thing I knew I was flying to the ASPCA in NYC to meet with a group of pet therapy dogs and their handlers, taking photos and getting to know their stories. On the following pages you will be able to read their stories and even hear in the words of Rachel McPherson, Founder of The Good Dog Foundation, how her dog Fidel made the emotional trips to Ground Zero and to the Pier 94 Family Assistance Center. You will also get to see their photos and the paintings I later created. They all worked tirelessly giving of themselves to the families, firefighters, rescue workers and support groups. It was a moving and humbling experience to be in a room, surrounded by such great dogs.

Shortly thereafter, thanks to contacts provided by The HSUS, I flew to Virginia to meet with a group of Search and Rescue dogs and their handlers. It was there that I met Sky, Nero and other dogs that were the first to enter the Pentagon after the terrorist attack. These dedicated dogs are called upon at some of the most tragic times. They go into tornado and earthquake stricken sites, search for lost or kidnapped children, basically doing whatever is asked of them to find lost and missing humans.

The experience touched another part of me giving me a deeper respect and understanding of the human/animal bond. I began to paint these wonderful creatures in addition to shelter dogs – from assistance dogs, hero dogs, miracle dogs, guide dogs, and the many dogs that through their unconditional love and devotion, touch the hearts of people every day.

It is with a heavy heart that I must note that many of the dogs painted in this tribute have since crossed over the rainbow bridge. However, their unwavering dedication, loyalty and love lives on forever.