A Searing Narrative of Rabies, and the Desperation to Forget It 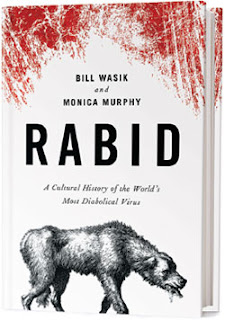 I started reading “Rabid: A Cultural History of the World’s Most Diabolical Virus,” a new all-about book, thinking that I would be most interested in the grim anecdotes and lurid details the book promises, and delivers.
I ended, however, by realizing that I am actually, along with other dog owners, a kind of public health hero.

Among the lurid details I didn’t know about until I read the book is that rabies, on its inexorable death crawl through the nervous system to the brain, can cause sustained erections, and on rare occasions frequent, and uncontrollable ejaculations in human males.

The authors write, “case reports from history describe up to thirty ejaculations in a single day” and go on to note that “The Roman physician Galen, in his own remarks on rabies, describes the case of an unfortunate porter who suffered such emissions for three full days leading up to his death.”

So now I know, and I kind of wish I didn’t. The book, like any good history of disease has a narrative course something like a highway with traffic accidents liberally scattered along the shoulder. You feel compelled to look, against your better judgment.

The reading experience thus swings between voyeurism and remorse, as your mental map of rabies comes more and more to resemble a fever dream, or a Hieronymus Bosch painting, and you feel that rabies must be diabolical indeed if you can be infected by the bite of a book.

That is until you come to a reminder of the mundane but profoundly comforting fact that rabies vaccinations for dogs, which have always seemed to me a bureaucratic annoyance (who gets bit by rabid dogs these days anyway?), have produced one of the historic successes in public health.

Hardly anyone in developed countries gets rabies now because dogs are routinely vaccinated.

In the rest of the world, however, 55,000 people die each year of rabies. The authors of “Rabid,” Bill Wasik and Monica Murphy, a married couple who are, respectively, an editor at Wired, and a veterinarian with a degree in public health, write that most of these deaths are in Africa and Asia, a great many are children, and almost all are the result of being bitten by mad dogs.

Other animals become infected with rabies and spread it to humans, but dogs are and have always been the link. We spend $300 million a year in the United States on rabies prevention. In a pet-centric world, we may sometimes forget that the vaccinations are not primarily to protect our pets, although they do, but to protect ourselves.

It was for human beings that Louis Pasteur risked his own life in developing the vaccine. The authors give a vivid account of his using a pipette in his mouth to suck saliva from the mouth of a rabid dog strapped to a laboratory table.

They also remind the reader of the double role dogs have played in human history — as man’s proverbial best friend, and as a common, and dreaded bearer of incurable, fatal madness.

Where rabies is still prevalent vaccination of dogs is still the answer, and public health experts argue that it can be cost effective and practical, even in very poor countries.

A 2010 paper in PLoS Neglected Tropical Diseases reported that the idea that most dogs in Africa are strays is wrong, that the “vast majority” of dogs are owned, can be presented for vaccination by the owners, and that mass vaccination campaigns are feasible

In the end, I came away from “Rabid” with much more than a store of anecdotes to drive away annoying dinner guests. I realized that dog owners who bring their pets for regular vaccination are actually a homeland defense corps of great importance. They help keep all of us safe from rabies infection and its many horrifying results — the fate of that poor Roman porter barely scratches the surface — which I am now trying desperately to forget.