A Lesson for Paramedics: How to Treat Dogs Who Work in a War Zone 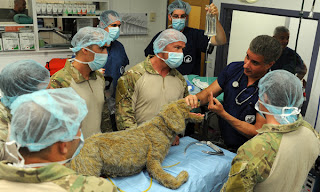 Hovering in a helicopter over an arid landscape in Afghanistan, Staff Sgt. Mark Joseloff thought his elite paramedic training had prepared him for whatever awaited him below.

Tending to a military dog that had collapsed in the 110 degree heat, Sergeant Joseloff, 34, leaned on what he knew about treating humans in similar situations.
He covered the dog in a wet blanket, applied electrolyte gel and ordered the helicopter to fly with its doors open. The dog, however, refused to drink water.
The dog survived, but the experience unsettled Sergeant Joseloff, a pararescueman in the New York Air National Guard. “I just kind of winged it,” he said. “I think I got lucky. That was an eye opener.”
Filling a gap in battlefield emergency care, more than a dozen rescuers in the Air National Guard, including Sergeant Joseloff, spent two days recently learning how to treat dogs in combat settings. With military dogs playing crucial roles in operations in Iraq and Afghanistan, the need for expertise in quickly tending to wounded or sick animals has become imperative.
“There’s no reason that what we do on the battlefield should not reflect the best medicine in the world,” said Air Force Lt. Col. Stephen Rush, who helped organize the training.
The training was conducted by Long Island Veterinary Specialists, which is considered one of the most advanced veterinary hospitals in the country, and by K-9 Medic, a company that teaches how to give emergency medical care to service dogs.
Colonel Rush, a clinical assistant professor of neurosurgery and radiation oncology at New York University, said the two-day training could serve as a model for future courses.
There are about 2,700 dogs serving in the armed forces; 29 have been killed in action in Iraq and Afghanistan, according to a military spokeswoman.
The dogs sniff out bombs and detect booby-traps inside buildings and along roadways. The total value of a trained working dog — often German shepherds, black Labrador retrievers, or Belgian Malinois — can reach $40,000. In addition, the units they serve grow emotionally attached to their dogs.
“A dog is like a brother to these guys,” Sergeant Joseloff said. Elite pararescuemen, trained as emergency paramedics, are responsible for many rescue and recovery missions in remote and dangerous locations.
On a recent Monday at Long Island Veterinary Specialists in Plainview, the pararescue members took turns gently rolling two black Labrador retrievers, named Angel and Shadow, onto their sides. The men learned how to carry a dog without hurting its spleen and how to carry one with a back injury. A hospital worker showed the men how to examine a dog’s gums to determine if it is sick. They took the dogs’ pulses. For the most part, Angel and Shadow kept their poise, allowing the soldiers to poke and prod them.
“You might not have it so easy in the field,” said Marissa Soto, a veterinary technician.
The facility offers some of the most advanced animal care available anywhere, with a more sophisticated M.R.I. machine than many hospitals have and specialists who include dermatologists, ophthalmologists, hip surgeons and brain surgeons. Dr. Dominic J. Marino, the hospital’s chief of staff, has become so highly regarded for his work on dogs with certain neurological disorders that he has been invited to address conferences of doctors who treat humans with similar disorders.
During the training, instructors emphasized the similarities in treating dogs and humans. The soldiers practiced sewing wounds on preserved pigs’ feet using the same kind of stitching they would use for humans. In other lessons, like treating a dog in shock, the men learned the appropriate dog-size doses of fluid to use.
But there were important differences. Humans in pain rarely bite the medic treating them. Dogs can be a different story, so muzzling the injured animal is a priority. And the men were surprised to learn that applying a tourniquet to a wound, a standard procedure on humans, might cause more harm on a dog.
As part of the training, they put on blindfolds and used their hands and feet to feel the ground and reach a stuffed dog inside the hospital’s rehabilitation center. With an instructor narrating beside them, they simulated a check of the dog’s vital signs. The instructor sprayed water to simulate blood escaping the dog’s body as the soldiers applied bandages. Many forgot to muzzle the animals.
Jo-Anne Brenner, the director of K-9 Medic, helped plan the curriculum for the training. She said the goal was to make it hands-on and to ensure that the pararescuemen committed to memory the skills necessary to treat dogs in crisis situations.
Ron Aiello, the president of United States War Dogs Association, an advocacy group for working dogs, says that the military’s treatment of working dogs has improved significantly during the last half-century.
“I was a Vietnam-era dog handler,” Mr. Aiello said. “We knew nothing. Not even first aid. Not even first aid if your dog got hurt.”
Now, military dog handlers are trained in first aid and veterinarians are stationed in war zones. Still, training military paramedics in animal emergency care is important because they are often the first on the scene providing medical attention.
As Colonel Rush put it: “That’s how we’re hard-wired — to rescue people, or people’s dogs.”
By ERIC P. NEWCOMER
The New York Times
PrevPreviousRecognizing Smiles
NextPill Could Join Arsenal Against BedbugsNext